When Andrea Canning and her husband, USMC Lieutenant Colonel Tony Bancroft, decided to try for just one more baby in hopes of adding a son to their family of five daughters, they envisioned it going much like her previous pregnancies.

“It was so against the grain for us because we had five natural pregnancies,” Canning tells PEOPLE for this week’s issue of struggling to conceive before turning to in vitro fertilization.

A round of IVF resulted in two embryos, and the couple agreed they would choose the healthiest one to transfer — boy or girl.

“We were like, ‘We’ll probably just get all girls.’ If it was a girl, it would be a girl, that was fine,” says Canning. “When the report came back and the boy was a higher-quality embryo, we were like, ‘It’s meant to be.’ ”

The then-mom-to-be’s excitement quickly turned to worry as she realized she only had one chance at a viable pregnancy. “The whole time you’re on eggshells. ‘Is my bubble about to burst? What if something happens?’ ” she recalls. “I just felt like it was too good to be true. I was afraid to even buy baby stuff.”

On June 18, 2019, Canning and Bancroft welcomed their sixth child — and first son: George Anthony Bancroft III, whom the couple have nicknamed Tripp.

“He wasn’t crying when he first came out and I kept saying, ‘Is he okay?’ ” says Canning, whose delivery wasn’t without its own complications, including an adherent placenta that doctors said was a result of having multiple children.

She adds, “Everything was so chaotic and it felt like forever, but then I heard him cry and that was the greatest feeling.”

Despite a slower recovery — Canning takes iron to compensate for the blood loss during the delivery — as well as a short stay in the NICU for Tripp, the couple couldn’t be happier with how everything has worked out. “He’s our little miracle. It’s amazing,” she says.

“I’ve always wanted to experience having a son. At my age, I never thought that I would have another child. I’m just in awe every time I look at his face,” she shares.

But it was the moment Canning’s five daughters — Elle Corbin, 4, Georgia Rapalje, 5, Christina Margaret, 6½, Charlotte Brewster, 9, and Anna Katherine, 10 — arrived at the hospital to meet their baby brother for the first time that still makes the proud mom emotional.

“When they walked into the room, they ran to the little bassinet and were so happy and so excited,” she recalls of their magical first meeting. “It brought tears to my eyes.”

Now the girls take turns helping their mom care for Tripp, bringing Canning diapers and wipes and even feeding him pumped breast milk from a bottle.

“They have been fighting like crazy over who gets to hold him,” says Canning. “They are all little mommies. Every chance they get, they want to be around him.”

Canning is also enjoying watching Bancroft — whom she calls “the best dad ever” to their girls — bond with his newborn son. “He really, really wanted a son. Just the way he looks at him is so special,” she says.

RELATED GALLERY: Tamron Hall, Rachel Weisz and More Celebs Who Welcomed (and Are Expecting!) Children After 45

“He’s been waking up and feeding him and he’s just an awesome dad,” the new mother of six adds. “I think he sees a future golf partner!”

But Canning’s proudest moments as a mom come in the quieter times as she sits back and watches her family of eight all together.

“They’re my greatest accomplishment in this world,” she says of the couple’s six children. “We look at them every day and say how lucky we are.”

For more from Andrea Canning, pick up the latest issue of PEOPLE, on newsstands Friday. 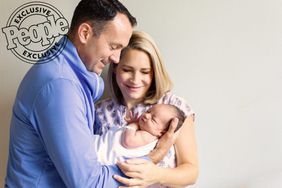 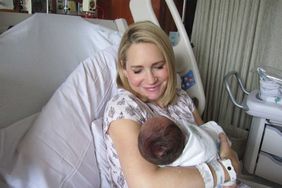