"[Wyatt] is gorgeous and perfect, and I've loved watching you become a dad," Kelly Ripa told friend Anderson Cooper during the broadcast

Wyatt Morgan is a natural on camera!

Anderson Cooper's adorable son made a surprise virtual appearance Sunday on CNN Heroes: An All-Star Tribute, which was hosted by the CNN anchor and his pal, ABC star Kelly Ripa.

After the 7-month-old appeared on a screen behind the pair (wearing a shirt reading, "CNN HEROES,"), Ripa gushed, "There's Wyatt! He's the most beautiful baby ever."

"He is gorgeous and perfect, and I've loved watching you become a dad. It's been my favorite thing this year," the Live with Kelly and Ryan star, 50, told Cooper.

Anderson Cooper Shares Adorable Selfie with Son Wyatt, 5 Months: "He Is Such a Happy Baby"

Cooper previously stopped by Ripa and co-host Ryan Seacrest's morning talk show back in October, where Ripa — who was celebrating her 50th birthday at the time — told her guest that Wyatt is "the only good thing that has happened in 2020 ... from [her] perspective" and that he has "given [her] a reason to wake up in the morning."

"I feel like it's woken me up," Cooper said of fatherhood. "I've always felt like my life hadn't really begun, which is ridiculous, but suddenly you wake up and you're like, 'This is what it's all about. There's nothing more important than this.' I'm just incredibly blessed and lucky."

Ripa, a close friend of the Anderson Cooper 360° host, also quipped that she has "decided that [she is] Wyatt's grandma, in place of" Cooper's late mother, Gloria Vanderbilt.

RELATED VIDEO: Anderson Cooper Opens Up About Being a Dad to Baby Wyatt: "This Is a New Level of Love"

Cooper recently chatted with Food Network star Ina Garten during an episode of Full Circle and raved about his baby boy's healthy appetite.

"He gives me hope," Cooper told Garten, explaining that Wyatt is a "good eater," unlike himself: "I have a palate of a 5-year-old, but apparently a 7-month-old has a much better palate."

The father of one then detailed all the foods his son, whom he welcomed via surrogate in April, has been enjoying thus far.

"He's drinking milk mostly but I give him an oatmeal cereal in the morning," Cooper shared. "He's eating squash and broccoli and mashed cauliflower and mashed peas — none of which I would ever eat as a kid and I'm so thankful that he is." 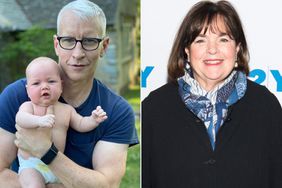