The 34-year-old author shared the news on Friday's episode of the couple's Labyrinths podcast, which detailed the arrival of their new daughter, Eureka Muse.

The episode followed Knox from the moment she noticed some bleeding at 38 weeks pregnant, to being admitted to the hospital and the eventual birth of her baby girl.

Though Knox announced the birth on her podcast, the New York Times reported on Friday that she andRobinson, 39, became parents months ago.

Knox told the publication that she initially kept the birth a secret in part because "I'm still nervous about the paparazzi bounty on her head."

Fourteen years ago, Knox was wrongfully convicted and then exonerated for the 2007 murder of roommate Meredith Kercher when she was a 20-year-old American student studying abroad in Perugia, Italy.

On Friday, Knox posted to Instagram a photo of herself and Eureka taken by Ricardo Nagaoka for her New York Times profile, calling it "the only picture of her I will ever share on social media."

"Since my exoneration, I've struggled to reclaim my identity and protect the people I love from being exploited as tabloid content. It's not easy, and I often feel like I'm trying to invent good choices out of bad whole cloth." she wrote.

"I know that I cannot 100% protect my daughter from the kind of treatment I've suffered, but I'm doing the best I can. Which is why this will be the only picture of her I will ever share on social media," she added. "I'm so grateful to everyone who has wished @emceecarbon and I well on our journey to parenthood. Thank you for believing in us."

Knox and Robinson also explained their decision to keep things private on their podcast, saying that will not share any images of Eureka on social media as that is "a decision for her to make, many years from now."

Knox added of her newborn daughter, "She deserves the privacy and autonomy that I was denied."

News of Eureka's arrival comes three months after Knox revealed on her podcast that she had previously suffered a miscarriage.

In a July 7 episode, she revealed that she suffered the miscarriage at six weeks, explaining that she and Robinson "got pregnant very fast" once they began trying after having an IUD removed. According to the couple, they began nesting for their baby on the way, setting up the nursery and a mural in the baby room. At a doctor's visit, however, there wasn't a heartbeat.

"I did feel incredibly disappointed that that was the story of my first-ever pregnancy. ... I thought, like, I knew exactly what I want to do with my first pregnancy, and to have it not come to fruition not through choice felt like a betrayal," recalled Knox.

She announced her pregnancy on a subsequent episode of Labyrinths released in August.

"Oh, thank goodness! Yay, we did it!" Knox excitedly said in audio from the moment they got their positive pregnancy test result.

"That's right, we're pregnant," she and Robinson, whom she married in February 2020, said in unison, adding at the time that they've been documenting their experiences "from day 1" and will share more soon. 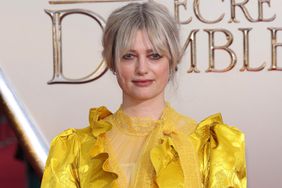 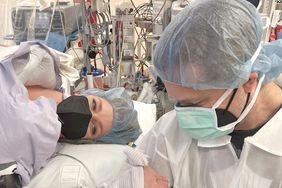