After 7 years of marriage, however, Clarkson filed for divorce from Blackstone, citing irreconcilable differences. The divorce was later finalized in March 2022 and the kids now live primarily with their mother. "Kelly is more than fine. She is doing great and facing forward," a source told PEOPLE in August 2021. "She's enjoying the fact that she has the kids for the vast majority of the time and is enjoying time spent with them."

"Kelly always worked so hard and is a great mom," another source told PEOPLE after the divorce. "She is very relieved that the divorce is settled. She just wants to be with her children."

In 2021, Clarkson opened up about co-parenting with Blackstock, saying, "It's tough. ... I know with me and Brandon, it's just a difficult thing because we're in different places, and it's like, we both agree on the main things, but it's a hard thing when you're not together all the time, for me personally."

Although she did stress that the former couple always "focus on" their kids, adding, "As long as you make sure it's about the children and their best interests, then we're both on board."

Clarkson and Blackstock confirmed they were expecting their first child together four weeks after they wed. They welcomed daughter River Rose on June 12, 2014, in Nashville.

"Our baby girl River Rose Blackstock arrived on June 12th!" Clarkson tweeted at the time. "Thank you everyone for all of your well wishes! Brandon and I are on cloud 9!!"

River has been in the spotlight since she was very young. When she was just 2 years old, she rode along with her mother in the 2016 Nashville Christmas Parade, in which Clarkson served as the grand marshall. She even served as the inspiration for Clarkson's 2016 children's book, River Rose and the Magical Lullaby.

"It's kind of a cool thing to be on a plane with my daughter, we were going on trips to the U.K. and Asia and Australia, all these amazing places that she was too little to remember," said the star. "Basically I started writing down these little fun stories — of like when we went to Australia and she got to hang out with some kangaroos." The stories eventually turned into a book of each place they visited.

Clarkson has also been open about her daughter's independent personality. "She will run a company one day because there's no way she's gonna work for anyone," Clarkson told PEOPLE in 2018. "She does not heed advice very well. She's just very ballsy, which is awesome."

"I love that [River] is very bold, and she's progressive for 3," the singer added. "She watches Jurassic Park and loves it, and Harry Potter … it doesn't affect her and she's just very grown up and very boss."

Clarkson talked about River's bold personality during a 2017 appearance on Today as well, telling host Hoda Kotb, "[River's] so cute, but she can work it y'all," she said. "It's scary foreshadowing."

She continued, "I don't want my daughter to be a pushover when she's older. So that's an awesome thing, it's an awesome aspect of her character."

During quarantine, River stepped into her mom's shoes as a TV personality to send a message to viewers of The Kelly Clarkson Show. "Hi everybody! I know there's a 'snickness' going around and we can't be together," River said in a video. "But it's okay, we can still call and we can still … when you're sleeping, you can still dream about each other and I hope you're doing fine. And I love you! Bye!"

When he was young, Remy had some hearing issues and delayed speech development. "He had a speech problem because he had this ear problem when he was a baby. We didn't know," Clarkson shared in 2020. "But way deep down in his ears, he got clogged up with a ton of wax where we thought, almost, he was deaf because he spoke as if he was underwater."

The hearing issue set him back "almost nine months" in his communication. "The big milestone for us is Remy getting to really find out his own personality and his identity, because it's been frustrating for him to not be able to really vocalize his emotion," Clarkson said. "The fact that he's making full sentences now and full-on engaging with us is really a blessing."

Clarkson took her kids to Disneyland to celebrate Remy's 2nd birthday in 2018. The family celebrated with Woody and Jessie from Toy Story. In July 2021, the kids also enjoyed a Walt Disney World vacation with their mom. "We had so much fun at Disney World!" Clarkson wrote on Instagram. "All the rides were amazing but oh my gosh, y'all, Pandora and the Star Wars rides are where it's at! Thank you for a magical vacation, Disney."

The musician has shared that River and Remy have very distinct personalities. "They're not shy at all, but they're just different," the mom of two said. "He could care less that you're in the room, and she wants everybody to know she's in there."

That difference in personality was made clear when Clarkson brought her kids to the season premiere of The Kelly Clarkson Show in 2021. Coldplay frontman Chris Martin was performing his song "Yellow" when Remy interrupted, saying, "I need to go to the bathroom!" The mom and daughter laughed, and Martin gave Remy a high five before Remy made his exit.

Like many parents, Clarkson struggled with how to help her kids through the COVID-19 pandemic — but a major change came in the fall of 2020 when Remy resumed in-person school. "I think we really forget how hard this is on [children]," she told the Los Angeles Times. "My kid has been in school now and he has been seeing other kids — his whole disposition has changed. There's just a different lightness to him."

But the kids had another challenge during the first year of the pandemic: their parent's divorce. "We have a lot of help as far as therapists or child psychologists because we want to do it right," Clarkson said during an interview with Extra. "I definitely want to do it right. Everyone's sad and it's okay to be sad."

She added, "We know the best thing here is to protect our children and their little hearts." 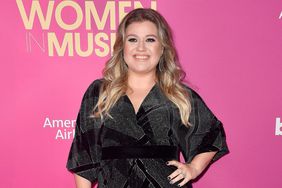