The Backstreet Boy and his wife Rochelle welcomed their second child on Sunday, PEOPLE confirms exclusively

The Backstreet Boys member and his wife Rochelle welcomed their second daughter on Sunday, March 19, his rep confirms to PEOPLE exclusively. Born at 5:10 p.m. in Los Angeles, Lyric Dean McLean weighed in at 8 lbs., 3 oz. and measured 22 inches long.

“I was told by someone very dear to me that having a child will change you forever, and that was beyond true with Ava. We decided to try one more time because even though Ava is so independent, the idea of having a sister or brother for her became more and more important to us,” McLean tells PEOPLE exclusively.

“Despite the fact that I’m an only child and (all jokes aside) turned out okay, my wife is one of four and that showed me there’s something beyond special about having siblings. Now, seeing the excitement and anticipation that Ava has about being a big sister is truly amazing, and the best feeling in the world. She’s been practicing for months with her dolls, and with some of my wife’s friends’ babies.”

Adds McLean, “Having two baby girls is a dream come true and we couldn’t be any more proud or excited to welcome Lyric Dean McLean into the world and into our family.”

The 39-year-old performer announced his bundle of joy on the way this past Labor Day, with an Instagram photo of four pairs of Air Jordan sneakers.

“So the McLean family will be expecting a new addition to the family next spring!! #laborday! Ha get it ‘labor’ day! I’m a goof!” he cheekily captioned the post.

“#avaisgonnabeabigsister #baby2! Keep u all posted!!” he adds. “We’re so excited.”

McLean spilled the beans on the baby’s sex in October, telling Entertainment Tonight, “A lot of girls in the house! Girl power all the way! All my boys have boys, so it’s nice to have girls.”

The singer is currently coming off of the premiere of his “Backstreet Boys: Larger Than Life” Las Vegas residency, which kicked off March 1 and will return in April.

Of Rochelle, he added to ET that she was due “literally just shy of a week after,” the show’s hiatus, saying, “Hopefully I’m not in the middle of the show and all like, ‘I have to go!’ ”

FROM COINAGE: If You Had To Google For “Ibiza” After The Grammys, You’re Not Alone

McLean hasn’t made it a secret that he hoped to add to his family. In January 2016, he spoke to PEOPLE about how the couple were exploring their options about whether they’d have a child biologically, adopt or make a different decision altogether.

But one thing’s for sure: He definitely knew having two kids wouldn’t be a cut-and-dry, been-there-done-that experience.

“Whatever our next child is, boy or girl, you would think that, ‘Oh I did it once, I’ve got it.’ No. It’s hard,” McLean said. “It’ll make it easier, but it’s still going to be a brand-new learning process.”

“Backstreet Boys: Larger Than Life” at Planet Hollywood’s Axis in Las Vegas returns for select dates between April 12 and 28, then again between June 15 and July 1. You can buy tickets here or here, and book a stay here.

Second Child on the Way for Backstreet Boys' A.J. McLean

It's a Girl! Backstreet Boys' A.J. McLean Reveals Sex of His Second Child

It'll Be a Girl for A.J. McLean

A.J. McLean and Wife Rochelle Are 'Talking About' Baby No. 2 (Possibly Adoption!) 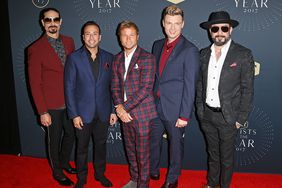