Actress and model Bridget Moynahan has been hard at work in Hollywood for many years – but when asked where she sees herself five years from now, she says she’d love to be married with kids.

“I know I’ve been on this career thing for so long, and you look at all of your friends who are finally getting married and having kids. I believe in a balance in life, so I think you can do it all.”

Bridget has been dating NFL quarterback Tom Brady for almost three years. Her recent movies include Lord of War and I, Robot. Fans of Sex & the City may remember her when she played Mr. Big’s wife, Natasha. She returns to TV this fall with a starring role in the ABC drama Six Degrees, whichpremiers September 21st. 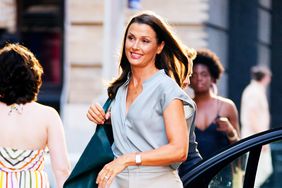 'And Just Like That' : Carrie Learns a Secret About Mr. Big — and Bridget Moynahan's Natasha Returns