If you’re a celebrity, you can’t avoid the paparazzi. How then have Tom Cruise and Katie Holmes managed to keep their precious bundle Suri Cruise unphotographed? Typically, celeb parents are photographed taking their baby for a walk but protect them by covering the stroller, carseat or the baby itself with a blanket. Yet from the lack of photo evidence, it does not appear that Suri has ever seen the light of day. Even if she has been outside on Tom’s property, you’d think aerial photographers would have captured a fuzzy image at least.

This lack of photos has inspired such buzz in the media about where Suri Cruise is and if she even exists. Us Weekly has a countdown ticker until we see her. In fact, 37% of Celebrity Baby Blog readers think she does not exist.

It didn’t help that people doubted Tom and Katie’s relationship in the first place and that their relationship has had a certain unusual aura. Then people point to the fact that photographic and videographic evidence of Katie during her pregnancy showed some inconsistencies. She started to show very early on but then sometimes did not appear to show. Katie’s bump seemed to balloon daily, and not necessarily getting larger! Her belly seemed to change shape every time she was photographed. The best illustration of this is a timeline created by a Pink is the New Blog reader. Even accounting for her posture, she appeared much larger on March 25th than April 5th. For example, TMZ.com’s video of Katie shopping at Barney’s just days before Suri’s birth shows nary a waddle. (As a formerly pregnant woman, I do need to point out the not everyone pregnant woman waddles or constantly rubs her belly or supports her back. My gait never changed.)

Then two photos were taken that, to me, showed that Katie had been pregnant. After Suri’s birth, Katie was photographed at Tom’s son Connor game in a way that showed her belly and apparent stretchmarks. She was also photographed another time with her nursing bra unhooked in the front and exposed. To me, those photos are proof of her past pregnancy and subsequent nursing of a child, but naysayers say the stretchmarks were makeup and the showing of the nursing bra was staged and not an accident.

Other people point to the fact that Tom and Katie were so public with their relationship and their pregnancy that it doesn’t make sense they would be private with their child. It seems so incongruous to parade their affection and then go into hiding immediately after the birth and never show off the baby. Still, no matter how public Tom and Katie were with their relationship and her pregnancy, they are certainly entitled to their privacy. They could have also changed their mind about putting themselves out there.

A new popular rumor I have heard is that the pregnancy was faked, that they had a surrogate carry the baby but that something happened and they are scrambling to cover it up or find a standby or substitute baby.

With all of that said, I do think there is a case to be made for the existence of Suri Cruise- or at least a child carried and given birth to by Katie Holmes.

Katie did appear pregnant
Estimates I’ve seen in US Weekly and Star put Katie’s weight gain at 35 lbs which is the top of the amount they recommend you gain. Given that Katie was so thin prior to the "pregnancy," this was an appropriate amount for her to gain. Anyway, her face looked fuller and her body and definitely her boobs grew larger as well (which are the telltale sign for pregnancy). Of course, she could have just gained weight for other reasons.

Maybe they really don’t want us to see Suri
We take it for granted that we get to see photos of many celeb babies in People magazine. But not every celebrity wants to have their child in the spotlight. Some celeb parents manage to evade the paparazzi. They either avoid public events, don’t bring their child to highly public places, or ask paparazzi not to take their photos. Case in point is Tom and ex-wife Nicole Kidman‘s fierce protection of their children Isabella (aka Bella) and Connor. Connor was 1 and Bella was at 3 before their photos were published.

It’s true that there is a rumor floating that the reason we haven’t seen photos of Suri is because Tom wasn’t satisfied with the paycheck he could receive for selling them, but who knows if this itself was just a ploy to drum up publicity or just a rumor.

Not that I necessarily believe this but Tom is reported to have told a friend, "I don’
t care when they come chasing after me, but our child didn’t sign up for that." (Life & Style, Jan. 9, pg. 31) Ironically, most of the time, the paps didn’t even have to chase Tom- it almost appeared that he chased them!

Why fake a pregnancy?
What do Tom Cruise and Katie Holmes have to gain from faking a pregnancy? They received tons of publicity from their "courtship" and engagement. Was the only way to top Tom’s couch-jumping proclamation of love to simulate a pregnancy and subsequent baby? Compare whatever potential publicity gained from that to what they have to lose if it was proved that the pregnancy was faked.

Tom Cruise Thankful to Photographers For Priceless Shots of Suri

Where is Suri Cruise?

Behind the scenes of Suri's Vanity Fair shoot 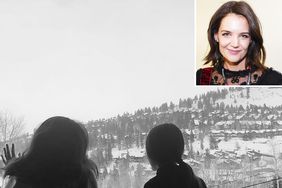