On Thursday, sources confirmed that Zayn Malik and Gigi Hadid had split amid reports of a recent dispute with her mother Yolanda

Zayn Malik and ex Gigi Hadid's mom Yolanda Hadid are at odds after an argument.

"There's no love lost between Yolanda and Zayn," a source tells PEOPLE.

On Thursday, Malik, 28, tweeted a statement about the alleged incident between himself and Yolanda, 57, saying that he is typically a private person but chose to speak out because the situation was "'leaked' to the press."

Though he didn't specify an outlet, a story published by TMZ claimed that he "struck" Yolanda. PEOPLE has since obtained court documents that confirm that Malik was charged with four counts of harassment after an incident on Sept. 29 in which he allegedly "grabbed [Yolanda] and shoved her into a dresser, causing mental anguish and physical pain."

For more on the dispute between Zayn Malik and Yolanda Hadid, and other top stories, listen below to our daily podcast PEOPLE Every Day.

Malik pleaded no contest to multiple charges of harassment against both Gigi and Yolanda, the court documents say. He has adamantly denied "striking" Yolanda.

A friend of the former One Direction member tells PEOPLE that Malik has insisted he never hit Yolanda, and the fight began when "she came over uninvited while Gigi was away for work and he was taking care of Khai ... That led to an argument."

As news of the incident broke, multiple sources confirmed to PEOPLE that Gigi and Malik, who share 13-month-old daughter Khai, have split.

"It was a super toxic relationship," the Malik friend adds.

A family friend close to Gigi, 26, now tells PEOPLE that "Zayn has a complicated personality," adding: "It's been hard at times for Gigi to live with him."

"They are both good parents though. They co-parent," the source continues. "Yolanda is of course very protective of Gigi. She wants the best for her daughter and grandchild. She has had some issues with Zayn. She thinks he could treat Gigi better. This is creating conflicts between Yolanda and Zayn."

Amid the dispute, a Malik source says he is focusing on Khai.

"Zayn's an amazing dad, and Gigi has said so. They are not fighting," the Malik source tells PEOPLE. "They are actively and amicably working to find the best way to co-parent now. Yolanda is inserting herself into a situation that does not involve her."

Reps for Malik and Yolanda have not responded to multiple requests for comment.

Shortly after Malik's initial Twitter statement, a rep for Gigi told PEOPLE in a statement that the model "is solely focused on the best for Khai. She asks for privacy during this time."

The pair's relationship has been anything but smooth sailing over the years since they first sparked dating rumors in November 2015.

Since then, the couple has broken up a few times — yet always found their way back to each other.

After making their steamy official debut in January 2016 with Malik's "Pillowtalk" music video, the couple publicly broke up in March 2018, reconciled a month later in April — then split again in January 2019.

Gigi then dated Bachelorette star Tyler Cameron from August 2019 to October 2019 — before reuniting with Malik in January 2020.

Since then, the couple announced Gigi's pregnancy in April 2020, welcomed their baby Khai in September and have been co-parenting since.

As for Malik's relationship with Yolanda, Gigi told Harper's Bazaar earlier this year about her family's dynamics, explaining that Malik usually sided with her mom in discussions.

"This is not to say that I don't have a heart or Bella doesn't have a brain, but when dealing with family stuff and world issues, my mom calls me the brain and Bella the heart," Gigi said at the time. "My brother is half and half. Whatever the family dinner-table discussion is, Bella will be very emotional and compassionate, and I'm sitting there pulling up charts and infographics, speaking very calmly."

At the time, Gigi also revealed how Malik fit in with her family: "At first he was like, 'How do I get a word in edgewise?' But now he is very comfortable. He speaks his mind. When he's in the middle of a family thing and everyone's like, 'Zayn, whose side are you on?' he's charming. He's usually on my mom's side, so he's smart in that sense." 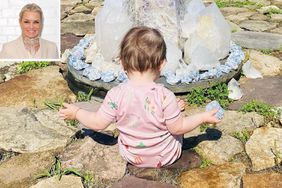