Travis Barker's kids are thrilled for their dad following his engagement to Kourtney Kardashian.

The Blink-182 drummer, 45, shares stepdaughter Atiana, 22, son Landon, 17, and daughter Alabama, 15, with ex-wife Shanna Moakler, whom he was married to from 2004 to 2008. All three of the children posted on Instagram following the Sunday evening engagement.

"Congratulations @kourtneykardash and @travisbarker I'm so happy for you guys love you guys so much!" Landon wrote in an Instagram Story over a photo of the newly engaged pair kissing.

"So happy for you guys I love u both!" Alabama echoed on Instagram while giving a look at the sparkly engagement ring on Kardashian's finger.

For more on Kourtney Kardashian and Travis Barker's engagement and other top stories, listen below to our daily podcast PEOPLE Every Day.

Atiana also posted from the special night, sharing a pic of Kardashian's new rock as well as an image of the reality TV star and Barker sweetly kissing.

Kourtney Kardashian Is 'Ecstatic' to Marry Travis Barker: 'Would Also Love to Have a Baby,' Says Source

Kardashian, 42, and Barker got engaged in a romantic, beachside proposal on Sunday at the Rosewood Miramar in Montecito, California. He popped the question at sunset surrounded by candles and roses in the shape of a heart.

The Keeping Up with the Kardashians star confirmed the exciting news on Instagram by sharing pictures from the romantic proposal with the caption, "forever @travisbarker."

"It was a complete surprise for Kourtney," a family friend told PEOPLE. "Travis told her family that he planned to propose, but everyone was great at keeping it secret. The Rosewood is their favorite for short weekend getaways. They often stay at the hotel. This is why Travis proposed there. It's a very special place to them, but it was also easier to keep everything a secret by proposing there."

After the proposal, the happy couple celebrated with their famous families, including Barker's kids as well as Kris Jenner, Khloe Kardashian, and Tristan Thompson.

"Kourtney is of course ecstatic. She can't wait to marry Travis. She would also love to have a baby with him," the source added.

This marks Kardashian's first engagement. She shares her three children — Mason, 11, Penelope, 9, and Reign, 6 — with ex Scott Disick. In addition to Moakler, Barker was previously married to Melissa Kennedy from 2001 to 2002.

PEOPLE first confirmed Kardashian and Barker's relationship in January. They made their romance Instagram official in February after Valentine's Day, when the reality star shared a photo of the pair holding hands.

​​Never miss a story — sign up for PEOPLE's free daily newsletter to stay up-to-date on the best of what PEOPLE has to offer, from juicy celebrity news to compelling human interest stories.

Shortly after they started dating, a source said Barker had gotten the seal of approval from Kardashian's family. 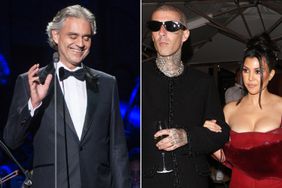