Taylor Swift will serve as the Mega Mentor on Season 17 of The Voice, premiering Sept. 23

The Voice is adding an extra dose of star power to season 17.

On Monday, veteran coaches Blake Shelton and John Legend announced that Taylor Swift will serve as this season’s Mega Mentor, a role the superstar previously took on during season 7 of the show in 2014.

“And our @NBCTheVoice mega mentor is….. @TaylorSwift!!! #TheVoice @johnlegend,” Shelton, 43, wrote on Instagram alongside a video of him and Legend, 40, guessing who the Mega Mentor might be (until a serendipitous run-in with Swift, 29, reveals the answer they’re looking for).

Legend shared the same video to his Instagram with the caption, “Our @NBCTheVoice Mega Mentor for Season 17 is VERY MEGA. If only @blakeshelton and I could figure out who it is.”

In her role, Swift will join Shelton, Legend and their fellow coaches Kelly Clarkson and Gwen Stefani to mentor the show’s artists and prepare each team for the Knockout Rounds, which will begin airing in October. During the Knockout Rounds, the artists will be paired with a teammate and select their own songs to perform individually.

“The first season that she came on, she instantly knew what to say, knew what her job was and was great at it,” Shelton tells PEOPLE. “This season, she brings even more experience to the table. It’s no accident that she’s the biggest star in the world. She’s not only talented, but she’s really smart. So it’s fun to work with.”

Stefani, who also got to work with Swift on the show back in 2014, couldn’t agree more.

“On this show, you’re always looking for these singers that are these super talented [artists] that have really good voices,” Stefani, 49, tells PEOPLE. “But I think Taylor’s gift is more her songwriting, and I feel like that’s the same for me so I thought we related to each other a lot. There’s so much to it, and she had so much to offer as far as advice. It’s pretty rare what she has accomplished. She’s just so relatable in the way she writes, especially to girls — and to me.”

During her first time working with Swift on the show, Clarkson says she was impressed with how invested she was.

“She cares about the artists — that’s what I loved about working with her the first time,” Clarkson, 37, tells PEOPLE. “I loved that she actually cared and invested. She cried a couple of times. She was really into it.”

In addition, Legend tells PEOPLE that it was “incredible” getting to see his team members be surprised and sing in front of Swift.

“Your artists don’t know who the Mega Mentor is until they walk out there … and then they realize they’re about to sing in front of Taylor Swift,” he says. “I mean, she’s had such an amazing journey as an artist and been so successful, like beyond any artist’s success in the world, ever. And she comes to our show and advises these new artists. So they feel so lucky and excited to sing for her. She really does have great advice for them.”

After the Knockout Rounds, the coaches alone will select a winner, who will then move on to the Live Playoffs. The artists not selected by their coach to move on will be available to be stolen by another coach. This season, each coach will only have one steal. 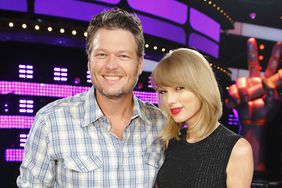 Taylor Swift Trolls Blake Shelton on Set of 'The Voice' : 'Oh, It's Not Blake Lively!'