Red (Taylor's Version) will be released on Nov. 12

Taylor Swift is getting her fans ready for the release of Red (Taylor's Version) by sharing an Instagram Reel on Friday bursting in red.

In her first-ever Reel, the songstress, 31, pans through a number of red items including a puff-sleeve top she is wearing, her red nails, some flowers, a dress on a hanger, shoes, jewelry and finally a wrapped, red present — as the words "it's a red season" appear onscreen and a snippet of her re-recording for the track "Red" plays in the background.

Last month, Swift surprised her fans by sharing that the album would release a week earlier than anticipated.

"Got some news that I think you're gonna like," Swift started her tweet. "My version of Red will be out a week earlier than scheduled (including the 4 disc vinyl) on November 12th !"

"Can't wait to celebrate the 13th with you and our new/old autumn heartbreak," she added.

The singer-songwriter also put Swifties on the edge of their seats when she hinted at the release of her album 1989 after she put "Wildest Dreams (Taylor's Version)" on streaming services earlier that month.

Swift announced in August that Red (Taylor's Version) will include collaborations with Phoebe Bridgers, Chris Stapleton and Ed Sheeran.

"I can't express my gratitude enough to these artists for helping me bring these songs to life. I can't wait til we can dust off our highest hopes and relive these memories together," Swift wrote."We'll also be making a bunch of new ones too, since Red (Taylor's Version) includes so many songs you haven't heard yet."

"Til then, I'll be counting down and picturing it all in my head," she added. "In burning red."

She then declined to work with the private equity company after they reached out following the purchase since Braun's Ithaca Holdings would still profit off her old music for "many years." 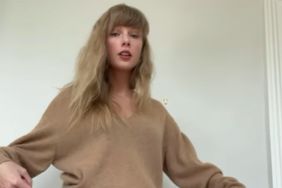