"I'm not going to let you or your client make me feel like this is my fault," the pop star fires back in Denver federal court

Taylor Swift took the stand in Denver federal court on Thursday, testifying for about an hour against David Mueller, the former deejay accused of groping the singer.

“It was a definite grab, [a] very long grab,” Swift, 27, said in court Thursday. “It was long enough for me to be completely sure it was intentional.”

Swift went into further detail about the “horrifying” and “shocking” experience, which stems from a standard meet-and-greet photo-op Swift held before her Red tour concert at the Pepsi Center in Denver on June 2, 2013.

“He stayed latched on my bare ass cheek as I lurched away from him, visibly uncomfortably,” Swift said. “The first couple of milliseconds, I thought it must be a mistake. I moved to the side very quickly.”

Afterwards, “a light switched off in my personality,” testified Swift, who added that she “just looked at the floor. I couldn’t look at either one of them, and I just said in monotone, ‘Thanks for coming.'”

At one point, Mueller’s attorney, Gabriel McFarland, asked Swift why the front of her skirt wasn’t ruffled in a photo taken at the time of the alleged incident. “Because my ass is located on the back of my body,” she fired back, drawing murmurs from the gallery that was packed with fans.

Swift was repeatedly asked about what she thought Mueller did with his hand, and her descriptions became increasingly more graphic: “He stuck it right up,” she said under oath.

“Have you ever watched police shows?” McFarland asked. “Yes!” Swift said. “I named my cat after Detective Olivia Benson from Law & Order: SVU.” When the topic turned to police lineups, Swift said, “This is an accurate ID,” dismissing Mueller’s claim that it was not him but rather a former colleague, Eddie Haskell, who sexually assaulted Swift.

“It happened to me. He had a handful of my ass. It happened to me. I know it was him,” said Swift, facing multiple questions about how confident she was in her allegation. “I didn’t need a picture. I could have picked him out of a line of a thousand … this is not alleged. I don’t need you to grill me about the tiny details of this photograph.”

Asked about Mueller’s girlfriend, Shannon Melcher, who is smiling in the photograph, Swift replied, “Yeah, she did not have her hand on my ass.”

Swift — who occasionally glanced over at her brother Austin and father Scott Swift in the front row of the gallery as she testified — also claimed that she has kept her story straight since the alleged incident four years ago: “You can ask me a million questions about it and I’m never going to say something different,” she explained. “I never have said anything different.”

“It happened to me,” she continued. “I have a 3-D recollection of it as well as photographic evidence. He had a handful of my ass. It happened to me. I know it was him.”

Mueller sued Swift in September 2015, claiming that he lost his job at 98.5 KYGO after the singer’s security team accused him of violating Swift by touching her butt. Responding to Mueller’s allegations, Swift’s rep told PEOPLE at the time that “the radio station was given evidence immediately after the incident” and “made their independent decision.”

Under oath Thursday, Swift was asked about how she reacted when she learned about Mueller’s termination. “I didn’t have a reaction to a strange person I didn’t know losing his job … that was a product of his decisions, not mine,” Swift says. “I’m not going to let you or your client make me feel like this is my fault.”

Earlier in her testimony, Mueller’s attorney pressed Swift about her response to the alleged sexual assault in the moment, to which she responded, “Your client could have taken a normal photo with me.”

Then he focused on the quality of security provided by her bodyguard, Greg Dent, asking why he didn’t take action as the situation unfolded. “[Mueller’s] hand was under my skirt,” she replied, adding, “[My] bare ass.”

McFarland pressed Swift about why the bodyguard was no longer employed to protect her. Swift indicated that “quite some time after this incident,” she was “restructuring our security team.” Though “we did offer him a position,” Dent declined the opportunity, Swift explained.

Further questioning Swift about her bodyguard, the attorney wondered if Swift and Dent had a special “signal” for emergencies. Swift said no.

Swift made it clear that she thought Mueller and his girlfriend, Melcher, were intoxicated during the alleged groping. “It appeared to me that the two of them had both had a couple of drinks beforehand, which is perfectly normal,” she said.

Though meet-and-greets are common for Swift, the singer indicated that this was the first time she felt groped. “What Mr. Mueller did was, like I said, very intentional, and the location was very intentional,” she said. “And I wasn’t going to blame [my bodyguard] Greg Dent … none of us expected this to happen. It had never happened before.”

Later in her testimony, Swift addressed Mueller’s account of the incident from Tuesday and Wednesday, during which the former DJ alleged that his “hand came into contact with a part of her body … what seemed to be a ribcage or ribs.” He also said that Swift seemed “cold and standoffish toward me.”

She also refuted Mueller’s claim that the photo happened quickly and he had to jump into place, saying, “This was not jostling. There was no diving into the picture. We were perfectly in place to have the picture taken. This was not an action shot.”

When given the opportunity to cross-exam Swift, her attorney, Doug Baldridge, declined, telling the judge, “Absolutely no questions, your honor.”

Andrea Swift, the pop star’s mother, took the stand Wednesday in what is expected to be a nine-day trial, detailing how she “wanted to vomit and cry” after her daughter told her about the alleged groping.

“I knew there was something horribly wrong in that picture,” Andrea said of the image taken when the alleged groping took place. “I know those eyes better than anybody. She was pulling away. She has that smile frozen on her face, but there’s something going on in her eyes. I just looked at it and I was sickened.”

Mueller alleged in his filing that it was actually his former colleague, Haskell, who sexually assaulted Swift. But the singer countersued in October 2015, claiming that “she knows exactly who committed the assault” and that Mueller “lifted her skirt and groped her,” making Swift “surprised, upset, offended, and alarmed.”

Swift’s suit asked for a jury trial and stated that any money she wins will be donated to “charitable organizations dedicated to protecting women from similar acts of sexual assault and personal disregard.” According to court documents, Swift’s goal is to “serve as an example to other women who may resist publicly reliving similar outrageous and humiliating acts.” 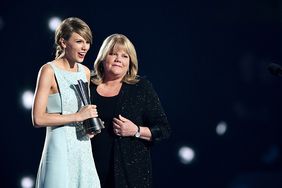 Taylor Swift's Mom 'Wanted to Vomit and Cry' After Learning of Daughter's Alleged Assault: 'It's Shattered Our Trust' 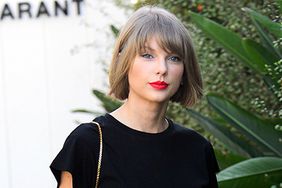 Taylor Swift's Deposition Against Radio DJ Released: 'He Took His Hand and Put It Up My Dress'