Review: Why You Might Not Understand the Importance of Taylor Swift's New Song

If Taylor Swift is reclaiming the snake, her new single is precisely the type of warning that would stop you in your tracks, like an 18-foot-long king cobra slithering past your feet

If you remember correctly from your sixth grade bio class, most snakes in the wild are considered to be nonvenomous. Things like scale patterns and coloring and head shape can tip you off, but then again, that requires getting maybe a little bit too close just to figure out whether or not something could kill you.

So if Taylor Swift is reclaiming the snake — a fan-fueled theory that draws a correlation between the emoji-laden comments that spammed her social media accounts at the height of last year’s Kimye drama vs. the cryptic serpent videos she used to tease her new music — her new single, an anti-haters anthem pointedly titled “Look What You Made Me Do,” is precisely the type of warning that would stop you in your tracks, like an 18-foot-long king cobra slithering past your feet.

Honey, I rose up from the dead, I do it all the time. Swift’s words bite, dangerous, even lethal, in the best and darkest way possible. Fans ravaging her lyrics in hopes of finding their inspiration (is “I don’t like your tilted stage” a nod to her feud with Kanye? Could “locked me out and threw a feast” really be a reference to that Katy Perry frenemy/frene-maybe situation?) are missing the point altogether. I’m sorry, the old Taylor can’t come to the phone right now. Why? Oh, ’cause she’s dead. Swift chose to usher in this new era with a song that molts every thought you’ve ever had about Taylor Swift over the past decade, every prom queen dress she’s ever worn on the red carpet (hey, it’s been a while), and every critic who’s ever oversimplified her catalog based on her dating life (hey, it’s been a whi— oh, nevermind, people suck). Look what you just made me do.

This is the Taylor Swift who’s dealt with so many extra-extra-XXL-dramatic headlines over the past few years — feuds! Receipts! The internet being the internet! — we literally have to put on a face mask and take a nap if we think about it for too long. You should know by now that she’s no longer Juliet crying on the staircase or even a nightmare dressed like a daydream. She’s the “actress starring in your bad dreams.” She’s slicing through zingers in courtrooms with badass precision. She’s back with new music after three years, and her brand of venom is not necessarily something you want to be on the receiving end of.

If “Look What You Made Me Do” is any indication, Taylor’s upcoming album (Reputation, out Nov. 10) will be exactly what you were hoping for all along: the perfect supply of empowering lyrics for all your angsty pre-holiday Instagram caption needs; the soundtrack to your otherwise non-red-letter day; a newfound appreciation of snakes — non-venomous and otherwise. 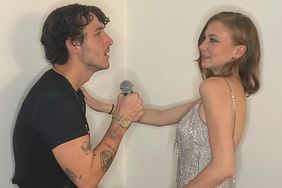