The teaser visuals come more than two months after Taylor Swift released her sci-fi inspired music video for "...Ready for It?"

Taylor Swift lives up to her “big reputation” in the first teaser for her “End Game” music video.

The superstar released a brief look at the visuals for the third single, which features Ed Sheeran and Future, off of her hit album Reputation on Thursday in a trailer on Good Morning America.

According to the morning show, the video was shot in Tokyo, Miami and London. The full video will debut at midnight, eastern time, on Friday.

When Swift teased the video on her social media app, The Swift Life, on Wednesday with stills from the clip, fans were quick to point out that the rainbow dress Swift is sporting may be a version of the same one she wears in her Reputation magazines.

In another scene, Swift rocks a t-shirt while standing on what appears to be London’s Millennium footbridge in front of St. Paul’s Cathedral.

The new video will come more than two months after Swift dropped her sci-fi and anime-inspired music video for “…Ready for It?” The music video for her first Reputation single, “Look What You Made Me Do,” was released in August and featured Swift channeling her past selves and declaring the “old Taylor” dead.

On “End Game,” Swift continues to play with hip-hop and holds her own alongside pal Sheeran and Future, who provide rapped verses.

While Sheeran has previously collaborated with Swift — he’s featured on and co-wrote the Red track “Everything Has Changed” — “End Game” is Future’s first team-up with the pop star.

Throughout the track, Swift contemplates her public persona (“I got some big enemies”); that of a potential suitor (“me and you we got big reputations … you and me we would be a big conversation”); and decides she wants to be his “end game.”

Earlier this month, Swift added new concert dates to her massive Reputation stadium tour amid mixed reports of ticket sales. The full run kicks off in Arizona on May 8 and concludes in Texas in the first week of October. 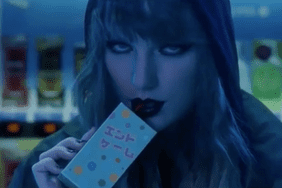