The singer is back with her ninth studio album Evermore, out now

Taylor Swift packed up her bags and moved to Tennessee at the tender age of 14 to pursue her love for country music. Two years later, she released her debut album, Taylor Swift, which peaked at No. 5 on the Billboard 200 Chart. All five singles released from the album, including "Our Song" and "Teardrops on My Guitar," were certified platinum by the RIAA.

Not only did Swift co-write all 13 tracks on her second studio album Fearless, but she also made her debut as a record producer, co-producing all the songs on the album with Nathan Chapman. After the album's release in 2008, Swift set out on her first-ever headlining concert tour, the Fearless Tour, from April 2009 to June 2010. Swift, who was 20 at the time, became the youngest artist to have a best-selling album when Fearless sold 3.2 million copies in 2009. The record went on to win four Grammys, including album of the year.

Swift wrote her third studio album, Speak Now, entirely by herself as the follow-up to Fearless. The album's original title was Enchanted, but it was changed by her label's president after believing the song's themes were less about fairytales and more about real life experiences, like heartbreak, romance and love. The album, which included songs "Mine" and "Sparks Fly" debuted at No. 1 on the U.S. Billboard 200 chart.

Swift's fourth studio album, Red, features 16 songs, including a collaboration with Ed Sheeran. Each and every Tuesday leading up to the album's release, Swift released a new song from the album. In its debut week, Red sold approximately two albums every second.

Named after the year she was born, Swift's fifth album 1989 marked her transition from country to pop. "My music before this has been very guitar-heavy, live drums, it's had a very acoustic sound at its core," Swift previously said in PEOPLE's 40th Anniversary issue. "This is a sound that's based in synth pop and keyboards and automated drums and vocal layering." The album won three Grammy Awards, including album of the year at the 58th Grammy Awards in 2016.

Three years after releasing her record-breaking pop album 1989, Swift announced via social media that she would be releasing her sixth studio album, Reputation, on Nov. 10, 2017. With black and white cover art that featured Swift sporting her signature dark lip, slicked-back hair and a sweatshirt, the mock newspaper headlines and columns superimposed over part of her face gave a strong hint that she was about to address the drama that had encompassed her life. The album reached No. 1 in 13 countries and its accompanying stadium run became the highest-grossing tour of all time in the United States.

With a new, lighter color palette making its way across the singer-songwriter's social media beginning in early 2019, fans knew Swift was up to something — and hoped it was a new album. Clues were confirmed that April, when Swift revealed the first single and video, "ME," featuring the album's title hidden in the clip. In June, she announced her seventh studio album, Lover, would be released that August.

As black and white images of trees started dotting Taylor Swift's Instagram page in mid-July 2020, Swifties attempted to figure out what it all meant shortly before the singer-songwriter shocked her fans with a surprise — her eighth studio album, Folklore, would drop at midnight.

"Before this year I probably would've overthought when to release this music at the 'perfect' time, but the times we're living in keep reminding me that nothing is guaranteed," she explained. "My gut is telling me that if you make something you love, you should just put it out into the world. That's the side of uncertainty I can get on board with."

Fans flipped when Swift dropped hints about another album — her second of quarantine! — in December 2020. Evermore hit on Dec. 11, framed as a "sister album" to Folklore.

"To put it plainly, we just couldn't stop writing songs," Swift wrote on Twitter. "To try and put it more poetically, it feels like we were standing on the edge of the folklorian woods and had a choice: to turn and go back or to travel further into the forest of this music. We chose to wander deeper in."

While Swifties gobbled it up, they also swore it was the second in a trilogy, spotting the word "Woodvale" on some of the Evermore art. But during a Dec. 14 interview with Jimmy Kimmel, Swift insisted that wasn't true, saying the word was mistakenly left out on some images. 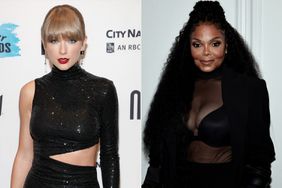