More than 40 years after his death, an unreleased song by John Lennon may see the light of day — at least, for one lucky auction winner.

A 33-minute cassette tape recorded in 1970 and containing the unheard song "Radio Peace," as well as interviews with Lennon and Yoko Ono, sold on Tuesday for the equivalent of $58,125, according to the Bruun Rasmussen auction house.

The tape was recorded at the New Experimental College at Skyum Bjerge, Denmark on Jan. 5, 10 years before Lennon was shot and killed in New York City at age 40.

Only about 10 people were present for the chat, which took place with just a small group of journalists and four 16-year-old students who arrived after an official press conference, looking to speak with the former Beatle for the school magazine, according to the auction house.

"[Lennon] speaks of the reason for being in Skyum Bjerge, how their art and music champions world peace and how everybody can contribute to world peace," according to a description of the tape. "There is talk about the length of his hair, and their micro-macro diet, how it was to perform with the Beatles and the importance of crashing the Beatle image."

At one point, Lennon briefly plays the unreleased "Radio Peace" as well as "Give Peace a Chance," after he's asked by a student to play the guitar. Bruun Rasmussen said the songs are "presented in a slightly different version in this interview."

At the time of the recording, the Beatles were, for all intents and purposes, already broken up, having recorded what would be their last studio session together in August 1969.

Lennon and Ono had been in Denmark "for private reasons" since December 1969, as Ono was looking to discuss the future of her young daughter Kyoko with ex-husband Anthony Cox, who had moved to the Scandinavian country, according to the auction house. Kyoko was present for the recording.

Also included in the auction were 19 color photographs and 10 black and white photos, all but one featuring Lennon.

John Lennon Honored by His Sons, Paul McCartney and Ringo Starr on 40th Anniversary of His Death

"The atmosphere was remarkably relaxed – probably because the interview took place after the official press conference," the description said. "Photos show Lennon and Ono with Kyoko lounging on the couch with their feet resting on a coffee table."

'friends' Cash in on John Lennon's Memory, and Yoko May Pay a Price 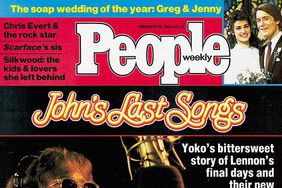 The Last Ballad of John & Yoko