The "Million Reasons" singer will take the field Sunday night

Lady Gaga will take the field for her Super Bowl halftime set in three days, and she’s successfully kept plans for her show under wraps — so what’s in store?

The pop star, 30, fielded questions Thursday at a press conference in Houston. And though she played coy, avoiding specifics to keep the event a “surprise,” Gaga dished on what we can expect.

Here’s what she had to say.

What songs will she sing — and will the meat dress make a reprise?

“We went through my whole career and we chose songs that we hope that both the football fans and the people who are just tuning in for the halftime show will enjoy,” Gaga said when asked if if she’ll be playing some of the classics from her five-album catalog, like “Alejandro” and “Edge of Glory.”

As for the number of outfit changes she has planned, “I don’t like to use the word cram when it comes to fashion. There’s some exciting stuff,” she said of her wardrobe, later adding: “I will tell you that there will be no meat dress there, so don’t wait for that. “

Things may get political.

“The only statements that I’ll be making during the halftime show are the ones that I have been consistently making throughout my career,” Gaga said. “I believe in a passion for inclusion. I believe in the spirit of equality and the spirit of this country as one of love and compassion and kindness. My performance will uphold those philosophies.”

Furthermore, she hinted at the values she holds dear that are fueling the show when asked if her goal is to “unify America.”

“I don’t know if I will succeed in unifying American — you’ll have to ask America when it’s over,” said Gaga, who campaigned for Democratic presidential nominee Hillary Clinton before Donald Trump was elected.

“Music is one of the most powerful things the world has to offer. No matter what race or religion or nationality or sexual orientation or gender that you are, it has the power to unite us,” Gaga added. “This performance is for everyone. I want to more than anything to create a moment that people will never forget. Not for me, but for themselves. That’s what I remember about great Super Bowl performances in the past, when you really get lost in the moment with your family.”

Last month, a tabloid report sparked whispers that the National Football League would try to bar the artist from getting “political” — a report the NFL slammed.

“This is unsourced nonsense from people trying to stir up controversy where there is none. The Super Bowl is a time when people really come together. Lady Gaga is focused on putting together an amazing show for fans and we love working with her on it; we aren’t going to be distracted by this,” an NFL spokesperson told PEOPLE in a statement.

The halftime show is dedicated to her fans — and ‘that kid that couldn’t get a seat at the cool kids’ table.’

“When I am working on different projects and I have my up and my down days, as everybody does in their lives, it is really my fans that are the reason that I do all of this,” she said. “They have a tremendous spirit and an outlook on the world — on its ability to change, on its power — and I’d say one of the things I’m most excited about for this halftime show. As much as it is a great moment for me in my life, I really feel like it wasn’t given to me, it was given to them. That kid that couldn’t get a seat at the cool kids’ table and that kid that kicked out of the house because his mom and dad didn’t accept him for who he was? That kid’s gonna have the stage for 13 minutes, and I’m so excited to give it to them.”

Beyoncé probably won’t perform with her … or will she?

Gaga’s 2009 “Telephone” collaborator headlined the show in 2013 and returned last year to open it with “Formation.” After Gaga captioned an Instagram post with a bee emoji — both Queen Bey’s hometown and the 2017 home of the Super Bowl — fans began speculating on a reunion.

“Don’t read anything into the little bee,” she said Thursday, neither confirming nor denying the involvement of Beyoncé, who announced Wednesday that she and husband Jay Z are expecting twins.

“I was actually with her the last halftime show she did, and she always is very inspiring and gives great advice — she’s a very focused and genuine performer,” Gaga, who sang the national anthem at the 2016 Super Bowl, added. “I have sent her flowers since I’ve heard of her amazing news, on the way, so I’m excited about her new child[ren] — and I’m going to be taking the spirit of many performers with me on that stage when I go up there. I’m grateful to have wonderful women in this business that are supportive of me.”

Her style team is taking to precautions to avoid a wardrobe malfunction.

As one reporter at the press conference pointed out, the last time a Super Bowl was held in Houston, one of its performers suffered a costly wardrobe malfunction while getting “Nasty.”

“Everything is going to be nice and tight for the game, so I wouldn’t worry about that,” she answered, quipping: “Some of you may have been excited for that.”

In addition to keeping her outfits intact, the singer and her team have been working for months to plan the perfect show.

“I am going to have to say that the preparation for this show is the show business version of the athlete. We have our own set of criteria that we go through,” she said. “For two months we dedicated our time to creating the story of the show, creating the musical score, and then we created the set, what it would look like, then we choreographed the actual dance routine and then we choreographed the pyrotechnics. Additionally to all of that, we go through an extensive amount of training so that I can sing and dance for the show for 13 minutes.

“What I would say is that what you’re watching at the halftime show, it’s not easy, and I say that because I want young people at home that are watching, when they see it: If you have a dream to be something big, you should go for it, but you gotta give it everything you got. You gotta wake up, and you gotta eat it, breathe it, see it, every second of the day. And if you do that, you might be lucky enough one day to wake up and be playing the halftime show.”

“As much as I’ve always wanted to be an artist, I didn’t really decide I wanted to be a musician until a little bit later in life,” she said. “I think I saw the halftime show before I made the decision that I wanted to be a songwriter. Watching Michael Jackson do the halftime show is one of the fondest memories that I have: He encapsulates everything that you love about a great performer. You watch him go onstage and you can see that he’s getting his head into the zone and he’s having a true defining moment about what it must feel like to be a champion.”

While she’s been prepping for her own defining moment on the field, Gaga has consulted her longtime friend Tony Bennett, with whom she recorded — and won a Grammy for — a jazz duets album in 2014.

“Tony always encourages me to just tell the story of the songs and to stay grounded in my craft and who I am as an artist, and he’s just wonderful,” Gaga said of her nonagenarian friend, who is expected to make some sort of appearance Sunday night. “I’m friends with a lot of people, but I think that my friendship with Tony Bennett is one of the most valuable things to me. He’s a tremendously wise man.” 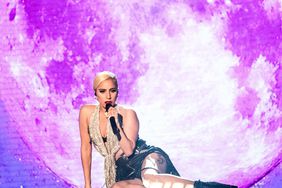