On Friday, the band re-released their track "Catching Fire" — a track Whibley wrote nearly six years after his wife attempted to take her own life

Sum 41's Deryck Whibley and his wife Ari are ready to speak about a dark moment in their lives.

In an interview with PEOPLE, Deryck, 41, and Ari open up for the first time about her attempted suicide eight years ago, how they've grown as a couple since and why Sum 41's track "Catching Fire" — re-released Friday featuring Nothing, Nowhere — was the catalyst for their healing.

"If by being honest and letting it out — which is terrifying — we could help anyone at all, one person feel less alone or more understood, then I think it's absolutely worth saying it," she adds.

The night Ari attempted to end her life wasn't one she planned. There was no note nor a goodbye.

The day was actually pretty typical: they had friends over and spent the day binge-drinking. After all, they were both pretty "big drinkers" at the time, she says.

Deryck went to bed early and Ari had the house to herself, so she kept drinking. As it became later in the night, her thoughts started to get darker and darker. Normally, she says, she'd be able to push the negative thoughts away. But this night, it was different.

"I finally had let the feelings really consume me to where [dying] really did feel like the only option," she says, so she got into her car and she tried to end her life.

By luck or fate or coincidence, a friend who used to live at the home showed up out of nowhere to pick something up while this was happening. They heard something in the couple's garage and immediately went to see what was going on.

"I just remember being absolutely terrified and embarrassed and ashamed and upset," she says. "It was easier to keep your deepest, darkest thoughts and demons inside."

The rest of the night and the following days were a blur for Ari and a complete shock for Deryck.

"And I never knew you needed help. Well, 'cause you always seemed so tough," he sings on "Catching Fire."

It was a "second chance" Ari didn't know how to appreciate then. And the couple didn't really cope with what happened and instead brushed it off for the next year.

"It was just kind of this weird thing. We just didn't talk about it," says Ari.

They continued partying and drinking throughout until Deryck's health scare in 2014, when he spent a month in the hospital for alcohol intoxication after several of his organs began to fail. That's when they went sober together.

"We said, 'We're going to take our lives seriously at this point and figure this s— out,'" says Deryck.

But Ari's suicide attempt and evident depression were still never a topic of conversation. For the next four years, that horrific night would become a "cloud always hanging over" Deryck's head.

"I just couldn't stop thinking about it to a point where if I was working and I didn't know where she had gone, I'd get nervous and run through the whole house, making sure she was okay," he says.

Sinéad O'Connor on Managing Mental Health After Abusive Childhood: 'There Was a Lot of Therapy'

Then, in 2017, Sum 41 performed alongside Linkin Park at a massive memorial concert several months after Chester Bennington ended his own life.

Although Deryck and Bennington were never close, performing alongside Linkin Park and in front of the late star's family brought back all of the memories, the guilt and the hurt from the moment Ari tried to take her life years prior.

Two weeks after that show, Ari left to be with her family in their hometown and Deryck was left alone at home for the first time in their 10-year relationship. "It just felt really lonely and haunting," he says.

So, like a method actor, he completely put himself in the mindset that she was gone and had left the night of her suicide attempt as he started to write the lyrics to "Catching Fire."

"It was heartbreaking and draining and torturous," he says. "And then from that moment on, it just felt like something had changed inside me."

"And if I failed you, well, I swear I tried my best / And now you're gone, so all your tears can lay to rest," he sings on the tear-jerking track. "Just so you know / You meant the world to us, I know that it's too late / And all I want's another chance, I can't accept that you have left."

As soon Ari got back, he played the track for her and through it finally expressed everything he was feeling.

"It just felt so liberating," Deryck says. "It was almost like I was able to say everything I wanted to say within that song, because that's how I speak best. We were able to really move forward and be able to now talk about things like that."

And for Ari, "hearing it from the perspective of someone on the outside looking in helped me put myself in his shoes."

She loved the track so much that she stole a thrown-out demo CD so she could listen to it on loop.

"I would sit and drive around listening to the same very rough mix of this song over and over and just cry," she says. "It was the first time that we really talked about it, even though we weren't talking about it."

"At the time, we were both doing damage to ourselves and to our relationship. And at the same time, we both got out of it and saved each other, and are here because of each other," Deryck adds. "And it only grows stronger and better as time goes on. So we both feel lucky and fortunate to have each other."

Moby Recalls Abusing Pills and Drinking 20 Beers a Night at the Height of His Fame: 'I Was Miserable'

Today, Ari and Deryck are in a much better place as a couple. They welcomed their son Lydon Igby, 15 months, just before the pandemic and look back at the time before their sobriety as a complete 180 shift.

Ari continues to face her depression, but she's okay with talking about it as she sees a therapist. She now has the tools and the support to continue pushing forward.

"Coming to terms with the fact that it wasn't just alcohol that had caused all of these issues, that it was just a part of who I was, was really difficult," she admits. "But because of therapy, I was able to start opening up more to myself and to Deryck. And so he got more comfortable asking deeper questions and more meaningful questions to where now there's not really anything that him and I hold back from each other."

"We talk about it in the same way you would talk about an injury," she adds. "It's a normal thing that we deal with day to day."

Through honesty and therapy, the couple is celebrating the small, daily wins but also the fact that they're both still here.

"Good things come if you work hard, that's just what I've noticed in our life," Deryck says. "Everything we enjoy in our life and are happy for, we work for. And that includes mental health."

"Catching Fire" featuring Nothing, Nowhere is out now. 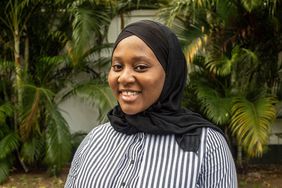