'SNL' : Miley Cyrus and The Kid LAROI Perform Their 'Without You' Remix for the First Time

Miley Cyrus was the musical guest for the May 8 episode of Saturday Night Live, which was hosted by Elon Musk

Miley Cyrus is ready to sing her heart out.

Cyrus, who was tapped as Saturday Night Live's musical guest for this week's episode, performed "Without You," her new song with the Kid LAROI, for the first time.

After kicking off the Elon Musk-hosted show by singing her godmother Dolly Parton's 1977 hit "Light of a Clear Blue Morning" for Mother's Day tribute as the cast appeared with their moms, Cyrus, 28, and the Kid LAROI, 17, paired up for their broadcast premiere of their single which they released last month. Cyrus also directed the song's music video.

Cyrus previously teased the SNL performance on her Instagram account, sharing a number of behind-the-scenes clips as they prepared to take the stage together.

In a nod to the SpaceX founder, at one point Cyrus could also be heard throwing out ideas for the performance, including space-themed projections. "StOkEd FoR @nbcsnl this week with my boys @thekidlaroi & #elonmusk," she wrote alongside the clip.

Cyrus also shared a photo of all three stars together in the SNL studio, captioning it, "HoLy TrInItY 💒🚀 #ElonMusk @thekidlaroi."

In a recent interview, the Kid LAROI told Variety that he and Cyrus met through "Without You" co-writer and producer Omer Fedi.

"We met through Omer because we'd been working together, and we talked about maybe doing a remix of 'Without You,' " he told the outlet. "Omer came to me and was like, 'Hey, would you want Miley to do the remix?' And I was like, 'Yeah, that would be dope.'"

"So we just linked up, met in the studio, she cut the record and then we went and hung out and had a little party. She's cool as f---," he added. "I remember when my cousins used to force me to watch Hannah Montana, so collaborating with her was pretty cool." 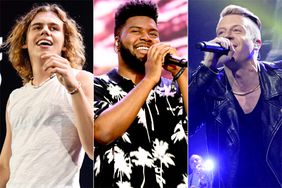