"I should have said I don't know what the situation is instead of the word stink which sounds extremely negative," Sheryl Crow explained Thursday

Sheryl Crow is clarifying comments she made surrounding who has ownership of Taylor Swift’s masters on Watch What Happens Live with Andy Cohen earlier this week.

The “If It Makes You Happy” singer, who recently signed to Swift’s old label, Big Machine Records, weighed in on the controversy during an appearance on Watch What Happens Live with Andy Cohen on Wednesday.

However, as someone who’s been in the music industry for three decades, the singer added that it’s not unusual for masters to change ownership numerous times.

“I will say one thing about masters. I signed with a record label 30 years ago and within five years it became owned by Interscope, and then Interscope got bought by Universal….these things, that’s just the way the business goes,” she said.

“It’s totally not unusual for your masters to change hands like 9,000 times,” she added. “So I don’t know what the big stink was. I’m out of the loop. I don’t really know.”

After her comments picked up steam, Crow hopped on Twitter Thursday night to elucidate the situation.

“To those who thought I was downplaying @taylorswift13’s masters changing hands, I chose the wrong word. I should have said I don’t know what the situation is instead of the word stink which sounds extremely negative. I have total respect for Taylor & always wish the best for her,” she captioned a video of herself.

“That was totally taken out of context. To be honest, I don’t generally weigh in about other celebrities because I don’t keep up with celebrity news. So when I said, ‘I didn’t know what the stink was about it,’ I meant, ‘I didn’t know what the situation was about,'” Crow went on to explain in the video. “I totally support Taylor. I think she does great humanitarian work. She’s outspoken politically, and she’s an awesome songwriter. So all the stuff about the masters, I don’t know what her situation was. I know my masters have changed hands quite a few times. But I wouldn’t weigh in on what her situation is because I really didn’t know. So for all you guys out there that think ‘stink’ is a negative word, it was totally wrong word choice. So, moving on…”

In an additional tweet, she wrote, “If you listen to the whole clip, I explain that I live with my head in a big hole, and don’t know the details… Don’t go for the clickbait. And stop pitting women against each other.”

Earlier this summer, Swift spoke out after learning that her first six albums fell into the hands of Scooter Braun following his $300 million deal with Big Machine.

In a Tumblr post at the time, Swift accused the manager of “manipulative bullying” over the years, and the weeks following became a game of he-said, she-said between the singer, Braun, 38, and Big Machine co-owner Scott Borchetta, who first signed the superstar when she was a teen.

Hours after Swift said she was “grossed out” by Braun’s acquisition of Big Machine Label Group and her catalog, Borchetta responded with his own lengthy statement on the label’s website, essentially accusing Swift of bending the truth.

In his letter, Borchetta, 57, claimed the deal he offered Swift gave her “100% of all Taylor Swift assets … to be transferred to her immediately upon signing the new agreement.”

In an interview with CBS Sunday Morning, which aired last month, the Grammy winner, 29, said she first learned of the new partnership “when it was online” — at home and in the studio.

“Nobody knew,” Swift said when asked if anyone in her inner circle had been told ahead of time. “I knew [Borchetta] would sell my music. I knew he would do that. I couldn’t believe who he sold it to. Because we’ve had endless conversations about Scooter Braun. And he has 300 million reasons to conveniently forget those conversations.”

The singer, who recently released her seventh studio album, Lover on Republic Records, went on to share that she will “absolutely” re-record her first six albums.

Scooter Braun Addresses Taylor Swift Feud: I Was 'Attacked and It's Not Based on Any Truth' 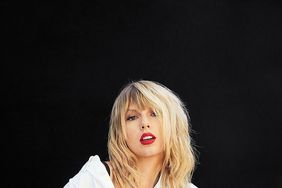 Taylor Swift Knows She's 'Loud' About Artists' Rights: 'It's Because Someone Has to Be'