"If I do that again it's over for me," Shawn Mendes joked about dropping Camila Cabello

Last week, the Canadian pop star, 20, and Camila Cabello, 22, released a steamy music video for their hit new duet — and the former Fifth Harmony member just shared some hilarious behind the scenes footage from their rehearsal for the Dave Meyers-directed vid.

While practicing their moves for the sizzling dance floor scene, Mendes didn’t quite grab on to Cabello’s hand during a sequence that required him to pull the singer towards him, causing her to fall to the floor.

“remember when you DROPPED ME ?!!!!! @shawnmendes,” Cabello wrote on Twitter, sharing the behind the scenes footage with fans.

Cabello instantly started laughing when she hit the ground — asking if they got it on camera. Mendes was quick to spring to her aid and helped the singer up while asking if she’s “ok.”

Luckily, (to his relief) Mendes got the move just right in the official music video, in which he and Cabello play passionate lovers. The “Havana” singer stars as a waitress while Mendes plays a mysterious motorcycle rider.

Cabello and Mendes previously worked together on their 2015 hit “I Know What You Did Last Summer,” which appeared on Mendes’ album Handwritten. The 2015 song helped spark relationship rumors between the pair. And though their chemistry onscreen in the “Señiorita” music video is undeniable, the two have consistently confirmed that they are just friends.

Mendes and Cabello had been working on the secret project for about nine months, the 22-year-old star admitted during a live chat with fans on YouTube on Thursday, prior to the release. Despite spending a lengthy time on the video, the new song was recorded in April.

“Actually it’s been a long time coming,” she explained. “We really felt like it was the right time about two months ago.” 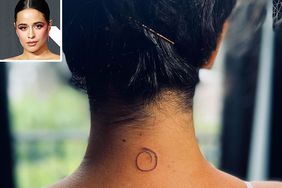