Sharon Osbourne is revealing how a “little cut” on her husband Ozzy‘s thumb turned into an “operation” on his hand.

After he underwent hand surgery at Los Angeles’ Cedars-Sinai Medical Center on Saturday, Mrs. O gave fans an update on the rocker during Monday’s episode of The Talk.

“He had a little cut on his thumb. You know when you pull the side of your nail and he just left it. And then he hit it on a door,” Osbourne, 65, said. “It started to get bigger and bigger, and then his middle finger, the same thing happened … and Saturday morning we took him into the emergency room and what had happened from a tiny thing here on the side of his nail, it had turned into two different infections in his hand.”

The CBS co-host revealed Ozzy, 69, remains hospitalized as he continues to recover from the infection.

“He had to have this operation where they cut the side of his thumb and this [middle] finger and they had to get rid of the infection,” she said. “It’s been from something you think is absolutely nothing, he’s still in hospital today. It’s unbelievable. He’s on an antibiotic drip, two different kinds and he’s just stuck there… eating ice cream.”

On Monday, Ozzy announced that he had postponed two additional shows due to his medical situation, but the rest of the tour has now been canceled altogether as he undergoes an additional surgery, according to a statement on the rocker’s Facebook page.

On Saturday, the Black Sabbath band member posted a photo of himself in a hospital bed with one hand resting in a bandage and the other hand holding an ice cream cone. “Feeling better after surgery. Ice cream helps,” he wrote.

“He canceled shows. We’re going to reschedule all the shows and he will be playing all the shows that have been canceled and hopefully he’ll be ready to work at the weekend,” Sharon said.

Daughter Kelly Osbourne kept her father company as he stayed at the L.A. hospital. The former Fashion Police co-host, 33, posted on her Instagram Story Saturday, “Chilling at the hospital,” alongside a picture of her feet up and the television on.

“Thank you all so much for your well wishes dad is doing so much better,” Kelly wrote. “Nothing that some rest, antibiotics and of course his favorite ice cream can’t cure.”

Blink-182 Cancels Tour Due to Travis Barker’s Health: Drumming Risks ‘Are Still Too Great’
Last Call: 6 Music Icons Who Are Retiring from the Road

This is not the first time Ozzy has postponed his shows due to his health.

He suffered from “extreme sinusitis” in January 2016 which led to Black Sabbath canceling multiple concerts in Canada.

In November 2017, Ozzy announced his farewell tour in a statement: “People keep asking me when I’m retiring. This will be my final world tour, but I can’t say I won’t do some shows here and there. I’ve been extremely blessed to have had two successful music careers. I’m looking at this final tour as being a huge celebration for my fans and anyone who has enjoyed my music over the past five decades.” 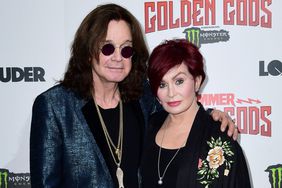