Selena Gomez Shares Selfie with the Weeknd from Coachella — and They Can't Keep Their Hands to Themselves!

Once the sun set, The Weeknd left Selena Gomez's side to make a surprise appearance on stage

Selena Gomez and The Weeknd continued to flaunt their cuteness — and a good amount of PDA — on the second day of Coachella Music and Arts Festival.

Just one week after her beau made their relationship Instagram official with a snap of Gomez kissing him on the forehead, the 24-year-old singer returned the gesture with a candid selfie from the star-studded festival in Indio, California, on Saturday.

The snap shows The Weeknd (né Abel Tesfaye), 27, with his arm wrapped around Gomez’s neck, as she smiles subtly and holds onto his arm. Both rock sunglasses for the photo, with Gomez peaking out above hers.

Although Gomez didn’t offer a caption for the shot, it racked up over five million likes in a matter of 12 hours.

The couple also got cuddly while watching performances during the day, with Gomez nuzzling into the “Starboy” singer’s neck as he wrapped his arm around her waist.

For the fashion-forward event, Gomez donned a blue sundress with daisies paired with a matching bandana tied around her neck and white shoes. Her boyfriend also dressed in blue, wearing tattered jeans and a patterned button-down shirt.

Once the sun set, The Weeknd left his lady’s side to make a surprise appearance onstage. He also performed alongside hip hop artist Nav, although Gomez didn’t join her boyfriend on stage.

The previous night, the famed duo were spotted holding hands as they made their way to the VIP area to watch rapper Travis Scott’s set.

Gomez looked casual in a short-sleeve, white button-down top and light jeans while The Weeknd went for black jeans and a black button-down with white embroidered details. He matched his girlfriend in shades and white kicks.

Since they began dating in early January, The Weeknd and Gomez have made their romance known on social media.

They’ve been spotted smooching nearly everywhere they go. On April 7, they were seen at a birthday bash in the Hollywood Hills hosted by the Weeknd for Canadian rapper Belly.

Before that, Gomez joined the Weeknd in Argentina, Colombia and Brazil, where he was touring.

Ever since 1999, celebrities have been venturing to Coachella for a weekend of good music, even better parties and top-notch fashion.

Those unable to afford the steep ticket price can live stream select performances from the festival on YouTube. 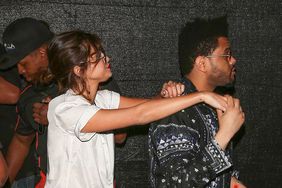 Selena Gomez and the Weeknd Get Cozy at Coachella