Following news of her mother Mandy Teefey’s hospitalization, Selena Gomez was working out in Los Angeles on Tuesday.

The singer, 25, was spotted leaving Hot Pilates, dressed in an all-black exercise ensemble as she covered her eyes with round sunglasses.

Gomez’s friend also shared a quick video of the group workout on Instagram with the blonde “Wolves” singer stretching her arms on a Pilates reformer.

Her Health Battle, Love Life & Everything in Between: Selena Gomez’s Ups and Downs

Her gym outing comes on the same day a source close to her family confirmed to PEOPLE that Teefey, who co-executive produces 13 Reasons Why with Gomez, was voluntarily checked out by medical personnel last week, dismissing a TMZ report that she was admitted due to an argument about Gomez’s reconciliation with on-off again boyfriend Justin Bieber.

“It’s been a stressful time for Mandy and she made the decision herself to go to the hospital and make sure everything was okay,” the source said. “This wasn’t just about Justin.”

A separate source added, “It’s true her family doesn’t approve of Justin, but this wasn’t just over a fight about him.”

Although Bieber has been “set on proving that he is a better boyfriend,” the pair, who also dated on-and-off from 2010 to 2015, won’t be spending the holidays together.

“Justin’s family always loved Selena, but Selena’s family is still not happy about her seeing Justin,” an insider previously told PEOPLE. “Selena doesn’t bring Justin to any family events. Selena is spending Christmas with her family. As of now, Justin is not invited.”

On Monday, Teefey, 41, shared an emotional Instagram post remembering Scarlett, the daughter she lost to miscarriage in 2011.

The mother of two shared a series of photos showing her pregnant, including one where Gomez smiles as she places her hand on her mom’s belly, and a throwback photo where Teefey is holding Gomez as a baby. 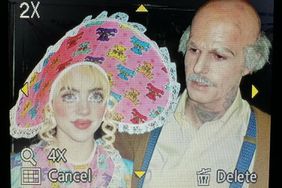