After Sunday’s announcement that Scooter Braun had purchased Big Machine Records — and with it, Swift’s entire music catalog — some of Braun’s friends took to social media to congratulate the mega-manager.

In a since-deleted Instagram story, Braun’s pal David Grutman insinuated that the manager now owns the pop star when he wrote: “WHEN YOUR FRIEND BUYS TAYLOR SWIFT.” Braun re-posted the Instagram story on his own account before later taking it down.

On Monday, a Swift fan shared a screenshot of the objectifying post, writing: “scooter literally exposed himself in a now deleted instagram story, before everything exploded. this shows his intentions and proves that he bullied taylor swift. we love men exposing themselves without even knowing it … #WeStandWithTaylor.”

In a scathing Tumblr post, the “You Need to Calm Down” singer revealed that she had tried for years to own her own music from Big Machine, and was told that she could only do so if she signed a new contract that gave her ownership of one of her old albums for every new one she completed.

“I walked away because I knew once I signed that contract, Scott Borchetta would sell the label, thereby selling me and my future,” Swift wrote. “I had to make the excruciating choice to leave behind my past. Music I wrote on my bedroom floor and videos I dreamed up and paid for from the money I earned playing in bars, then clubs, then arenas, then stadiums.”

Swift said learning that it was Braun who had ultimately purchased her masters from Borchetta was her “worst nightmare,” writing: “All I could think about was the incessant, manipulative bullying I’ve received at his hands for years. Like when Kim Kardashian orchestrated an illegally recorded snippet of a phone call to be leaked and then Scooter got his two clients together to bully me online about it.”

In the post, Swift added: “Now Scooter has stripped me of my life’s work, that I wasn’t given an opportunity to buy. Essentially, my musical legacy is about to lie in the hands of someone who tried to dismantle it. This is my worst case scenario. This is what happens when you sign a deal at 15 to someone for whom the term ‘loyalty’ is clearly just a contractual concept. And when that man says ‘Music has value,’ he means its value is beholden to men who had no part in creating it.”

The Grammy-winning singer also expressed disappointment in Borchetta for selling to Braun, as she explained he was well aware of the pain the executive had brought her.

“When I left my masters in Scott’s hands, I made peace with the fact that eventually he would sell them. Never in my worst nightmares did I imagine the buyer would be Scooter,” she wrote. “Any time Scott Borchetta has heard the words ‘Scooter Braun’ escape my lips, it was when I was either crying or trying not to. He knew what he was doing; they both did. Controlling a woman who didn’t want to be associated with them. In perpetuity. That means forever.”

Borchetta, whose rep declined to comment to PEOPLE, defended new business partner Braun, in a letter posted to his label’s web site on Sunday.

“As to her comments about ‘being in tears or close to it’ anytime my new partner Scooter Braun’s name was brought up, I certainly never experienced that,” he wrote. 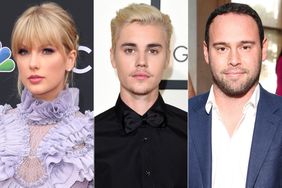 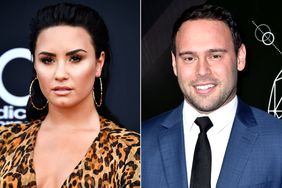 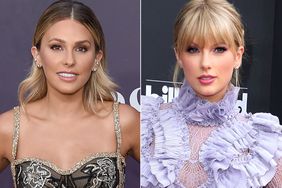