Morris stepped off stage and into the crowd during her performance on Today on Thursday to meet superfan Lily, who got the chance to ask the country singer a couple questions and pose for pictures

While performing on the Today show Thursday morning, the country star, 32, took a break between hits to meet a fan, Lily, in the audience.

"There's a little girl in the front row singing all your songs," anchor Savannah Guthrie said as she and Morris made their way to Lily's front row seat.

"Lily is blind, but boy, can she hear you," Guthrie said as she introduced the pair.

Lily had been gifted a signed guitar pick, and her first words to Morris were ones of gratitude. "Thank you so much for the guitar pick!" Lily said, bouncing a little with excitement.

Maren Morris Wants to Star as Elphaba in Broadway's Wicked: 'Chase Your Weird Dreams Down'

Lily also got the opportunity to ask the "Circles Around This Town" singer a couple questions while chatting in between songs: "What is Hayes' favorite song of yours, and how is he doing?"

Morris then asked to get a photo with Lily before heading back up on the stage, and both were beaming as a few pics were snapped.

The singer has been expanding her worldview as of late, chasing her "weird dreams" of being on Broadway and performing a once-in-a-lifetime duet with John Mayer in Nashville, which she said made her "brain explode."

She has also been working with an emphasis toward inclusivity in the country music world.

Morris — whose latest album, Humble Quest, came out in March — says that welcoming her son with her singer-songwriter husband Ryan Hurd was a turning point for her both personally and creatively.

"He's already taught me so much about how to be a person," Morris said of son Hayes. "It helped me see things in a deeper way and just feel more empathy for my fellow humans, having to raise one."

In October 2020 Morris released "Better Than We Found It," a protest song inspired by the Black Lives Matter movement that earned her a Grammy nomination (her second this year and 13th overall), for best country song. It's evidence of Morris's evolution into an outspoken, progressive voice in country music, a traditionally conservative industry.

"I didn't start making music to become an activist," she said. "I think it was a byproduct of just seeing the inequality in the genre I happened to come up in. Once you become aware of it, you can't really shut your eyes again. 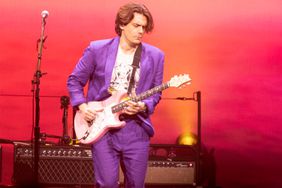