"It was a magical weekend filled with love and fun," the Cheetah Girls singer and Dancing with the Stars alum told PEOPLE

Bride-to-be Sabrina Bryan recently celebrated her upcoming wedding to fiancé Jordan Lundberg with nine girlfriends at the Playa Grande Resort in Cabo San Lucas — and brought all the accessories to match!

A Surprise from the Bride

The Cheetah Girls singer and Dancing with the Stars alum, 33, also surprised her BFFs with a girls' spa day — massages, a private pool and tropical fruits galore!

Bryan and Lundberg, 26, a strategic account manager at AddON Networks, were engaged in April 2017 at Ashford Castle in Ireland.

The couple's wedding is set for Oct. 6 at Wayne Newton's Casa De Shenandoah in Las Vegas. Bryan and Newton costarred on DWTS and became close, leading the legendary singer to offer his home as the venue.

"It was great to catch up and just be girlfriends," Bryan told PEOPLE. "No boys, no work, no worries for four spectacular days."

The group enjoyed an evening at Cantina Mexico, a restaurant owned by Dr. Phil's son.

"One of my favorite pictures was in my 'Wifey' bathing suit," Bryan told PEOPLE of the Dollstreet piece. The group was also outfitted in Team Bride hats by Mother Trucker and enjoyed personalized goodies from Gracious Bridal.

"It was a magical weekend filled with love and fun," Bryan told PEOPLE. "I haven't laughed and relaxed this much in a long time." 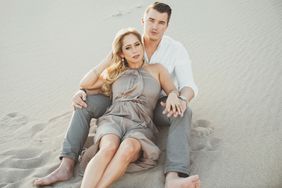