Roger Daltrey: Three Adult Daughters Suddenly Turned Up on My Doorstep — and I Love Them All

Roger Daltrey is opening up about how his legendary hell-raising with The Who provided him with the greatest surprise gift imaginable: A bigger, loving family.

"When three daughters arrived on my doorstep [unexpectedly in the '90s, the products of relationships with women in the '60s], I accepted them and I love them very much," Daltrey revealed to The Times on Wednesday. "I am very lucky."

"I wouldn't have been a good father when I was on the road," the singer added about his hotel-hopping with bandmates Pete Townshend, John Entwistle, and Keith Moon in the '60s and '70s. "There's no point in wishing that I could have. I couldn't.

"In the early days there were lots of parties, booze, and relationships," he continued about the band's extensive touring, which included a starring role at Woodstock in August 1969.

"We had no money, so we were sharing rooms and it was chaos," he said. "When we got arrested [in 1973 in Montreal, for wrecking a room], I'd been ordered to go to bed by the doctor, so I didn't do the smashing up. Some of those rooms did need a bit of redecorating."

Daltrey, 77, has a total of eight children and now lives a quiet rural life in Sussex, England with second wife, Heather. Yet he still regularly tours with Townshend (Moon and Entwistle died in 1978 and 2002, respectively) –— often in aid of the Teenage Cancer Trust, of which he is a patron with Sarah "Fergie" Ferguson, and her daughters Princess Beatrice and Princess Eugenie.

Despite The Who making it into the Guinness Book of World Records for playing the loudest concert of all time in 1976 (hitting an ear-splitting 126 decibels), the Pinball Wizard singer also has some surprising advice for a new generation of music lovers: Don't do the same!

"Young people should stop listening to such loud music. They don't need to," Daltrey told The Times. "If your ears are ringing, you'll pay. Pete and I both have to wear hearing aids and it's no fun taking them out; without them, life's a mumble."

As for the other trappings of rock 'n' roll success, Daltrey now firmly believes that nobody over the age of 50 should own a Ferrari and describes playing with a rock band as "like sitting on a stool and trying to maintain balance after four drinks."

Roger Daltrey on the Who: 'We're the Best F----ing Rock Band in the World'

While he's lent his voice to some of the most famous rock songs ever recorded, he also doesn't "actually like" his own vocals.

"I love voices like Joan Armatrading, Smokey Robinson, Howlin' Wolf, Robert Plant, Paul Weller," he told The Times. "And Van Morrison — his voice is the same as it always was."

On the pressures of touring, recording, and performing, Daltrey once led with his fists, these days the rock 'n' roll legend prefers to take everything in stride.

"I roll with things," he says. "What's the point of worrying? An Austrian physio I had in the Eighties would say, 'What are you holding on to pain for? When you let go, it will be alright.' That's how I approach everything now." 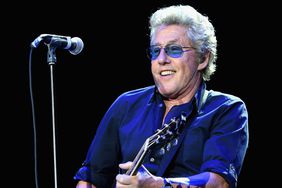 Desert Trip Headliner Roger Daltrey on the Who: 'We're the Best F----ing Rock Band in the World' 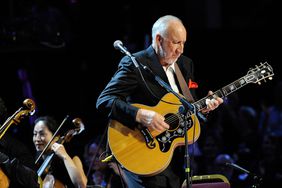