A portion of the sales will go to benefit the Lotus Foundation, an organization that promotes charitable projects aimed at advancing social welfare

Throughout the whirlwind journey of Beatlemania and beyond, Ringo Starr usually had a camera at the ready. “We always had a professional photographer to take photos of us, but I just loved taking pictures and I still do,” he says. By snapping shots of his friends and band mates, Starr managed to capture history—and an intimate look inside a cultural phenomenon.

The drumming legend exhibited his prowess behind the lens with the lavish 2013 book Photograph, and now he’s unveiled a series of prints containing rare, and in some cases unseen, pictures. The PHOTOGRAPH Portfolio 2017 is a collection of museum-quality prints, reproduced from the negative for the first time. Created in small artist editions of only 25 numbered copies, each print is signed by Starr himself, and comes with a certificate of authenticity.

The prints are available for order through Genesis Publications (info@genesis-publications.com), with a portion of the sales going to benefit the Lotus Foundation — an organization that promotes charitable projects aimed at advancing social welfare.

Take a look inside the PHOTOGRAPH Portfolio 2017, including commentary from Starr himself.

Ringo Starr: "Why would we have policemen's hats? Were we pretending to be policemen? I don't remember. But who's he going to fool? He's got his stage suit on."

Ringo Starr: "This is a fun shot of Paul and Mal Evans in France. When we were in hotels, we would just look for things to do and have a bit of fun. By looking at the table, you can see that we'd probably had a few drinks."

Ringo Starr: "They're looking at us, and I'm photographing them. The first couple of years, we saw a lot of places from the car because we couldn't go out anywhere. We were just too big time. Everybody wanted a piece of us, so getting out was a big day."

Ringo Starr: "When we were on the train from New York to Washington, the Press told us why we got such a great reception in America. They said, 'Ah, we came to kill you, but you gave as good as you got and we love that.' I walked to the back of the train and shot out of the back window. I like shots like this. It's very architectural."

Ringo Starr: "We were on a boat in Florida. Somebody lent us their motor launch and we went out. They let me drive and I came in to port straight on! I didn't swing it sideways, and I broke the rail. But, if you were a Beatle, you could break the rails on anybody's boat in those days."

Ringo Starr: "The songs are still relevant; the kids are listening to the music today."

Ringo Starr: "John, Cynthia, Maureen and I were on holiday in Tobago. There's the little pieces and the money that we used to play Monopoly."

Ringo Starr: "It's just that moment captured on film. I still carry a camera around but I usually take photos with digital cameras now."

Ringo Starr: "In the studio with Paul and John, through a prism lens. I thought I was being very creative and very incredible. 'Nobody's ever going to do this,' or so I thought."

Ringo Starr: "I'm still wearing all my rings, and a St Francis necklace that my auntie got me. It was ripped off in New York. The fans didn't really attack us a lot — those kids just got lucky. We would go out quite a bit in those days, but it started getting really crazy later on." 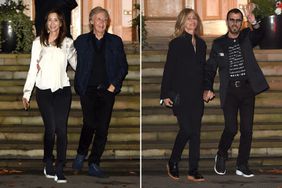