Rihanna Opens Up About New Album and Making Time for Boyfriend: 'I Need to Nurture This'

Rihanna’s got love on the brain ⁠— and, as fans will be happy to hear, that highly anticipated ninth studio album isn’t so far from her thoughts, either.

The “Work” singer 31, opened up about her love life and flourishing career as both a musician and businesswoman in a sit-down with her Ocean’s 8 costar Sarah Paulson for Interview magazine.

Though she played coy when asked about the special man in her life (she told Paulson to “Google it”), the star said that “of course” she was in love with billionaire boyfriend Hassan Jameel.

The ultra-private pair were first linked in June 2017, and earlier this month were spotted enjoying a romantic vacation on the Amalfi Coast.

Though Rihanna again stayed vague when discussing marriage (“Only God knows that, girl. We plan and God laughs, right?”) the nine-time Grammy winner spoke to the importance of her relationship, and how her newfound romance inspired her to fit more personal days into her busy schedule.

“I got into a new relationship, and it matters to me. It was like, ‘I need to make time for this.’ Just like I nurture my businesses, I need to nurture this as well,” she said. “I’ll shut things down for two days, three days at a time. On my calendar we now have the infamous ‘P,’ which means personal days. This is a new thing.”

She also confessed that parenthood was hopefully on the horizon, telling Paulson that she wanted to be a mother “more than anything in life.”

Her hesitancy in discussing her love life so publicly reflects what the star admitted was people’s biggest misconception of her: despite the fame, she’s actually exceptionally shy.

“People don’t know that I’m shy… because I kind of pretend it’s not happening people read me as being confident,” she confessed. “I still get nervous going to award shows. What is that? I always feel like everybody’s looking at me.”

Thanks to her jam-packed schedule, the Barbados-born singer says she’s lost the ability to pour all of her focus and energy into creating new music with the same speed as before.

“It’s the reason why an album isn’t being spat out like it used to,” she explained. “I used to be in the studio, only the studio, for three months straight, and an album would come out. Now, it’s like a carousel. I do fashion one day, lingerie the next, beauty the next, then music the next. It’s like having a bunch of kids and you need to take care of them all.”

Rihanna was unable to offer a timeline as for when fans can expect her ninth album, telling Paulson she “wish[ed] [she] knew” when it would be ready, but did tease that it would be “really fun.”

“It really does suck that it can’t just come out, because I’m working on a really fun one right now. I’m really happy with a lot of the material we have so far, but I am not going to put it out until it’s complete,” she said. “It makes no sense to rush it, but I want it out.”

RELATED VIDEO: Rihanna Is a Vision in White at Her Annual Diamond Ball

The singer confirmed last month to The New York Times’ T Style magazine that she’s hard at work on a reggae album, and said fans should not expect a collaboration with Lady Gaga or Drake, contrary to rumors.

“Not anytime soon, I don’t see it happening,” she said of working again with frequent collaborator and on-again, off-again fling Drake. “Not on this album, that’s for sure.”

In addition to her businesses, the star has also appeared in films like Valerian and the City of a Thousand Planets and Guava Island since releasing Anti, and lent her vocals to tracks like N.E.R.D.’s “Lemon,” Kendrick Lamar’s “Loyalty,” and DJ Khaled’s “Wild Thoughts.”

Rihanna Is Stunned to Discover Her Mini Me — and the Resemblance is Uncanny! 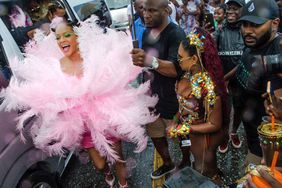 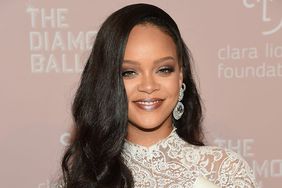 Rihanna Trolls Her Fans Who Want Her Album Out Now with Hilarious Meme: 'It Was All a Lie'