Raul Midón has released his new single, "Pedal to the Metal"

Gearing up for his genre-spanning new album Bad Ass and Blind, out March 24, Raul Midón has released his catchy new single, “Pedal to the Metal.”

“‘Pedal to the Metal’ is an expression on the importance of persistence in my life,” the singer-songwriter and guitarist exclusively tells PEOPLE of the track. “It could have been called ‘Never Give Up.'”

The New Mexico native, who has been blind since birth, has released eight albums since 1999. His ambition endures in the bold Bad Ass and Blind, the title being a description of its maker, endorsed by soul icon Bill Withers.

After performing as a featured artist in Monterey Jazz Festival On Tour, Midón tapped some of his fellow Monterey players to form a band for several songs. The tour de force title track celebrates Midón’s blindness with a ripping guitar solo, a fierce spoken word rhyme and thundering rhythms.

Midón will bring his musical chops to SXSW in Austin on March 18, and additional tour stops will continue until May 22 and can be found on his site. 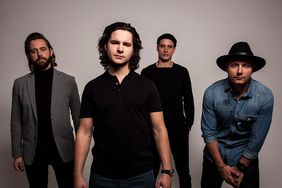