Rumors have been swirling that Offset has left the rap trio

It seems the days of Migos as a trio may be over.

The "Bad and Boujee" rappers — Quavo, Takeoff and Offset — have released music together for nearly 15 years. But a new track release and promotional materials for an upcoming performance indicate that the group may be moving forward without Offset.

Quavo, 31, and Takeoff, 28, released the song "Us vs. Them" on Friday with Gucci Mane, their second single since May that does not feature Offset, 30.

Neither "Us vs. Them" nor the previous single, "Hotel Lobby," were released under the Migos name; they were instead credited simply to Quavo and Takeoff.

Migos is also scheduled to perform in August at the National Battle of the Bands — and recent promotional materials touting the show include only Quavo and Takeoff. A clip teasing the performance says the event will feature a set by "Migos: Quavo and Takeoff."

A rep for the group did not immediately respond to PEOPLE's request for comment.

Speculation that Migos was now a duo began swirling in May after eagle-eyed fans noticed that Quavo, Takeoff and Offset appeared to have unfollowed each other on social media after they announced "Hotel Lobby." (According to NME, Offset's wife, Cardi B, has also unfollowed Quavo and Takeoff.)

Though the group's official Instagram account, which has more than 12 million followers, still includes all three rappers in its profile picture via the cover of their 2021 album Culture III, Offset has removed all mentions of the group from his Instagram bio.

Recent tweets from the star indicate that he plans to release new music in August. His Twitter bio still identifies him as one-third of the group.

Migos Rapper Quavo Graduates High School at 29: 'Now What College Should I Go To?'

Quavo told GQ earlier this month that the new era of Migos means each of the bandmates finding ways to express their individuality.

"It was all about Migos, Migos, Migos. The three of us," he said. "I feel like every group member has to establish themselves. Their own body of work. If not, you start losing members."

Regardless of their status as a band, the trio are still family. Quavo is Takeoff's uncle, while Offset is Quavo's cousin. 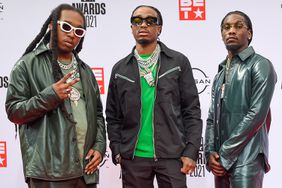