joan, made up of band members Alan Benjamin Thomas and Steven Rutherford, is set to release their newest track "so good" on Thursday

In an exclusive interview, the four-year-old band (made up of members Alan Benjamin Thomas and Steven Rutherford) share the story behind their rising success, creating new music during the pandemic — and exclusively share their newest track "so good" with PEOPLE.

"Over this last year we've been fortunate to be able to write and record everything ourselves," the duo told PEOPLE. "We live in Little Rock, Arkansas less than five minutes from each other. A lot of bands we know had to go on a pretty big hold when everything was shut down, but thankfully we were very much able to continue working on new ideas because of our situation. We mainly work out of Alan's bedroom studio, but we both have little home studios."

They added, "For this song, we definitely wanted to take some influence from early 2000s R&B and bring it into today. There's something about the instrumentation and groove in those songs that really made the subject of love feel really nice and accessible, and we really wanted that to translate in this song. Steven actually did some vocals on this song while he was stuck at home with COVID-19 in the fall, which ended up making it into the song."

"During the pandemic, it felt like there was such a big cloud over the world, and we just kept finding ourselves wanting to write songs to counter that feeling," the band, who put a unique take on alternative pop that ranges from dance to soaring ballads infused with hints of '90s R&B influences, concluded. "'so good' was a product of that. It just feels so good (pun intended) to listen to. The song is about feeling like you're meant to be with someone who just walked in the room. It's about being around someone that just makes your life feel good. It's about wishing that person was there your whole life, because you didn't realize how good it could be. We just wanted to make an expression of that feeling, and it turned into one of our favorite songs we've ever written."

The newest track is the first listen from one of two EPs set to hit together via Photo Finish Records in December. Every first Thursday of the month through the end of 2021, a new track will be released for fans to stream from the upcoming EPs, according to a press release obtained by PEOPLE.

For the past couple of years, the guys — who met while playing various gigs with separate bands in Arkansas throughout the years — have reached high accomplishments.

Their debut EP, 2019's portra, and last year's EP cloudy have been streamed over 90 million timesand the duo boast over a million listeners a month across platforms.

"How do we, as songwriters, help people transcend mundanity and find joy?" Thomas asked in the press release. "That's my personal goal. Connecting with a song can lift your spirits. Seeing how our music brings people joy—why else would we do it? It's what keeps me going every day. I love it."

For the past four years, the dynamic duo have built their empire by putting their music first — and are looking forward to what's ahead.

"This year is going to be special for us because we're putting our heads down and releasing more music than we have before," they said. "Everything we do is in-house, and that's the way we usually feel best when it comes to a joan song. We're making radio quality music out of a bedroom in Little Rock, Arkansas, and this is just the beginning." 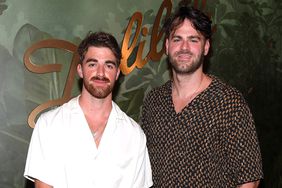