"It was so unfair to all the girls," says Pink, whose new Amazon Prime Video documentary, P!nk: All I Know So Far, premieres May 21

Pink is looking back on the scrutiny and comparisons she and her pop star peers weathered early on in their careers.

"It was so unfair to all the girls," Pink, 41, says in the new issue of PEOPLE of being pitted against Britney Spears and Christina Aguilera as they rose to fame in the early aughts. "None of us wanted that."

Pink was even marketed as an "anti-Britney" figure in music, which she never wanted.

Watch the full episode of People Cover Story: P!NK on PeopleTV.com or on the PeopleTV app.

"I love Britney — she used to carry around my album," says the star, whose new Amazon Prime Video documentary P!nk: All I Know So Far (streaming May 21) offers a rare glimpse of her life backstage on tour with her family in tow. "I was like, 'Dude, I'm a street punk, I just skateboard. That doesn't have to be the anti-Britney. I don't want to fight anybody.'"

Pink got some advice on the matter that she's carried with her through her two decades of pop stardom.

"One of the best things that [music executive] L.A. Reid ever told me was that this music business is big enough for everybody to win at the same time. There's no such thing as competition," she says. "I think we navigated through it as good as a 20-year-old girl can. Now I think it's totally different. Girls supporting girls is rad — I love to watch it."

As for which young artists Pink listens to these days? Breakout star Olivia Rodrigo, whom she was introduced to by 9-year-old daughter Willow.

"I love singing 'Drivers License' with my daughter," she says. "Her and her little 12-year-old friends gave me the whole lowdown on what happened between the three of them in all the songs!"

For more on Pink, pick up this week's issue of PEOPLE, on newsstands everywhere Friday. 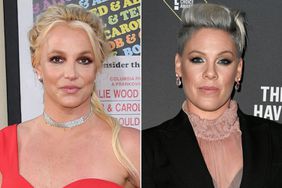 Pink 'Felt Sad' After Watching Britney Spears Documentary: 'I Could Have Reached Out More'