Not that the rock legend needs any help, but surprise guests like Bruce Springsteen, Krist Novoselic and Bob Weir add unforgettable moments to his tour

Let’s get one thing straight: Paul McCartney doesn’t need any extra star power. On Sunday night, rock’s favorite knight of the realm ripped through 39 of his seemingly endless stream of classics during a three-hour session at New York City’s Madison Square Garden. Part of his ongoing One on One tour, he was joined on the marathon sprint through his own musical history by his long-time backing band, who have now been with him twice as long as the Beatles. The previous show two days earlier made headlines for an encore duet Bruce Springsteen, but this night featured no such surprise guests—and, as usual, no opening act. It was pure Paul, and for the 20,000 people crammed into the dome, that was more than enough.

His audience is a venerable United Nations of backgrounds. Men and women who once shouted at the Fab Four on their all-too-few tours of the United States during their Mop Topped heyday stand aside their 21st century counterparts. Except for maybe the cell phones held aloft, the mania is identical. The emotional spectrum is broad; people cry, others kiss. Some dance with wild abandon, still more sing. One fan holds up a sign proudly proclaiming that this is his 113th time seeing McCartney in concert. The man himself spots this from the stage and can’t help but laugh. “You must be bored by now!” he jokingly chides. But it seems unlikely. The Beatles invented arena rock with their sold-out shows in baseball stadiums across the country in the mid ’60s, and McCartney has had more than half a century to perfect the process. A master showman with a goldmine of hits, his shows will always have the power to transfix.

It’s impossible not to be astonished by the seemingly supernatural stamina unleashed by the 75-year-old in the midst of his grueling performances, during which he jumps between instruments with the intensity of a man possessed. The iconic Hofner bass, proudly held aloft like his personal Excalibur, sees him through early Beatles tracks, including “A Hard Day’s Night,” “Can’t Buy Me Love” and “I Wanna Be Your Man.” In an instant he leaps over to the piano to tackle ballads like “Let It Be,” “My Valentine,” and “Hey Jude.” Then he straps on a custom Les Paul to free his formidable guitar shredding skills on the Wings-era staple “Let Me Roll It” before showcasing his gentle singer-songerwriter side on solo acoustic numbers like “Blackbird” and “Yesterday.” Whether it’s good health, musical passion, or some sort of Faustian pact, McCartney’s energy would be almost disconcerting were it not so joyous.

The show ends in a flash, literally, as band vanishes from the stage in a puff of smoke and confetti. It’s as if they’ve just pulled off the ultimate magic trick, and in many ways, they have—except it’s not a trick at all. It’s the magic of a man doing precisely what he was put on this planet to do.

A true musician at heart, McCartney delights in jamming with players of all stripes. Through it doesn’t wrap until December, we’ve decided to look back at all of the guests welcomed to the stage during the One to One tour…so far!

McCartney first partnered up with Novoselic and his former Nirvana bandmates Dave Grohl and Pat Smear years earlier at the 12-12-12 Concert for Sandy Relief—performing under the playful moniker “Sirvana.” As the One on One tour swung through Seattle, McCartney enlisted hometown rock hero Novoselic to lend some extra low end on “Helter Skelter,” the furious 1968 White Album track that predicts grunge by two decades.

The wife of McCartney’s friend and occasional songwriting collaborator Elvis Costello, Krall contributed piano and arrangements to Macca’s 2012 album, the prewar-tinged Kisses on the Bottom. During a concert in Canada, McCartney welcomed the jazz musician to the stage to back him on his musical love letter to his bride, Nancy Shevell.

Fallon may be known for his spot-on portrayal of a different British rock titan—Mick Jagger—but the late night star did a fair approximation of John Lennon’s vocal part as he shared a mic with McCartney on “I Saw Her Standing There.” Lacking a guitar, Fallon compensated by unleashing some furious dance moves as McCartney’s guitarist Rusty Anderson tore off a blazing solo.

Never shy about pulling fans onstage for a hug or occasional wedding proposal, McCartney got more than he bargained for when he invited young Leila Lacase up during a gig in Argentina. He initially had seen her handmade sign asking him to autograph her teddy bear, but once in the spotlight she revealed her true wish: playing bass with the Beatle. An instrument was retrieved and the brave 10-year-old held her own on a breakneck version of “Get Back.”

In town for Dead and Company’s performance at Boston’s Fenway Park just a few days earlier, Weir took on rhythm guitar duties during McCartney’s encore at the historic ball field. Though possibly a coincidence, the decision to kick off with the Wings hit “Hi Hi Hi,” was an appropriate one for any Deadheads in the crowd. They followed it up with “Helter Skelter,” which gave the audience the chance to watch New England Patriots’ tight end Rob Gronkowski aggressively rock out on air bass.

An ode to the Scottish peninsula that’s been home to his High Park Farm retreat since the ’60s, McCartney performed the 1977 song on several occasions during the Canadian leg of his One on One tour—each time backed by a full fleet of bagpipers complete in traditional highland dress.

Young and McCartney shared the bill at last year’s rock summit, so it makes sense that the old friends would take a minute to share the stage. After stepping up for a medley of “A Day in the Life” and Lennon’s anthemic “Give Peace a Chance,” they teamed up for an awesomely raucous rendition of “Why Don’t We Do It in The Road”—a stripped down White Album tune inspired by the sight of two monkeys…well, you get the idea. The pair gave a repeat performance during an additional date a week later.

The One on One tour features an airing of “In Spite of All the Danger,” an original composition on a self-produced recording made by McCartney, Lennon and George Harrison (along with pianist John Lowe and drummer Colin Hanton) in 1958. Acting under the name the Quarrymen at the time, the one-of-a-kind disc is widely accepted as the first Beatle-related record in existence.

Fittingly, McCartney takes things full circle on the tour by also performing his most recent song, the 2015 Kanye West/Rihanna collaboration “Four Five Seconds.” For his second week at Desert Trip, he welcomed the “Queen of Barbados” to the stage to take her verses.

The last time McCartney and the Boss tried to play together—in London’s Hyde Park as part of 2012’s Hard Rock Calling music festival—the police pulled the plug due to noise curfew violations as they rocked out on “Twist and Shout” and “I Saw Her Standing There,” twin tracks which bookended the Beatles’ 1963 debut album, Please Please Me. Thankfully there were no such limitations inside NYC’s Madison Square Garden, where the pair were free to let rip on “I Saw Her Standing There” not just once, but twice to make up for lost time. 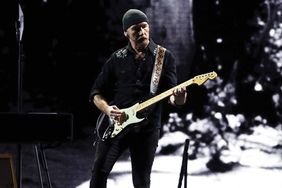