Paris Jackson and boyfriend Gabriel Glenn have called it quits.

The daughter of the late Michael Jackson and the musician — who perform together as the band, The Soundflowers — have splitafter more than two years of dating, PEOPLE confirms. (TMZ was first to report the news.)

The split comes shortly after the couple's Facebook Watch series Unfiltered: Paris Jackson and Gabriel Glenn aired its finale episode on Aug. 4. During the episode, Jackson, 22, said she and Glenn, 23, are "constantly butting heads."

“A big thing for Aries is we are very impatient, depending on what it is," Jackson said. "The people that we love and things that we care about, we have the patience of a saint. But it’s a very interesting dynamic. We both have double stubborn energy. I’ve always known I was stubborn, and I knew that he was stubborn because he’s a Taurus."

Jackson went on to say that she considers Glenn as "one of many soulmates."

At the end of the clip, Glenn said, "I think we said when we first got together, even if we didn't work out as a couple, we always would want to be in a band together. Our music was one thing we wanted to hold on to no matter what."

Jackson added: "I don't know what's going to happen in the future. But obviously there's someone that I strive to be. I want to grow, and I want to become a better person, a better musician ... but I can't do this without Gabe. Gabe showed me love does exist, not just in the movies, and it's not as pretty as it looks in the movies — it can get ugly and it can be more beautiful than described in the movies and it is possible. He makes me not feel as alone. He's had an impact on me and my life and my heart in ways that I cannot even describe. I can't see my life without him."

Earlier in the series, the couple touched on how their romantic relationship evolved from the first time they met in April 2018, when Jackson saw Glenn perform with his band the Trash Dogs at Hollywood's Rainbow Bar & Grill.

"I know when she was walking up that my body was saying, 'Be cool' but my brain was saying, 'Just run, just run' ...," Glenn said in the premiere episode of meeting Jackson for the first time. "We went from the Rainbow to an after party, and that's where I saw her playing an unplugged guitar. It felt very intimate. I knew I was walking towards a head over heels fall."

From then on, Jackson said, "it was pretty much on" between her and Glenn.

"We immediately just vibed," she said. "We spent three days straight together. Within a week, I was living in his van."

Though Jackson was passionate about Glenn from the start, she shared that she "never thought" she would "end up with a dude."

"I thought I'd end up marrying a chick," she said. "I've dated more women than men."

Jackson, who was previously linked to model Cara Delevingne, went on to say that she "wouldn't consider myself bisexual because I've dated more than just men and women."

In an interview with Remix in March, Jackson called Glenn her "muse."

"I owe a lot to him,” she said. "I started writing around 13 when I bought myself a guitar. I didn’t really start sharing it or recording it until I met Gabriel."

In turn, Glenn called Jackson "the jigsaw piece that completes me as an artist."

"She creates so naturally and honestly; it inspires me to be a better songwriter," he said. "I think having a unique spirit like hers allows us to channel things we’d never receive on our own."

Since 2018, Jackson and Glenn have performed together as The Soundflowers. They released their self-titled debut EP in June.

“Paris had always wanted to start a band called The Soundflowers,” Glenn said. "The first night P.K. and I hung out, we jammed at my rock ‘n’ roll band’s rehearsal studio. We showed each other songs and even wrote a few on the spot. Everything fit together so naturally, from our voices to our song-writing style. I had never met someone who fit so perfectly with my sound." 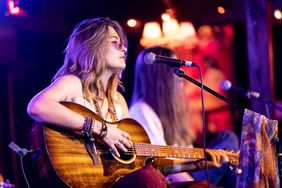 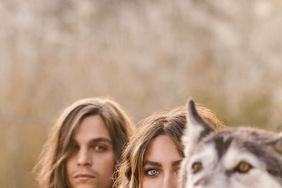