Nick Carter will not be prosecuted for alleged sexual assault after former teen pop singer Melissa Schuman detailed the alleged incident on her personal blog, claiming that Carter had raped her in the early 2000s.

“The reporting party alleged that in 2003, she was the victim of a sexual assault perpetrated by the suspect in his apartment. The victim was 18 years old at the time of the assault. The statute of limitations expired in 2013. Therefore an analysis of the strengths and weaknesses of the evidence is not warranted and the matter is declined,” a comment in the task force declination obtained by PEOPLE on Tuesday reads.

Following the decision, Carter’s attorney Michael Holtz said: “Nick Carter was cleared today when the L.A. County District Attorney’s Office rejected the charges against him. Nick has denied these allegations ever since he first learned of them last year, and was confident the District Attorney would conclude that there was no basis to pursue charges against him. He is happy to put this matter behind him.”

Schuman also responded to Carter’s charges being dropped, explaining that regardless of the decision “speaking out was the best thing I could have ever done for myself.”

“My family and I were well aware of the likelihood that my case was not prosecutable due to the statute of limitations in California regarding rape, which was modified in 2016. It is unfortunate that the law isn’t fully retroactive to accommodate assaults that have happened in the past, regardless of how far back,” she said in a statement obtained by multiple outlets.

“It gives me great solace to know that my testimony is fully documented, investigated and sealed for the future if needed by law enforcement. I gave my statement, as did the other witnesses. Speaking out was the best thing I could have ever done for myself and I hope it inspires others to do the same if it feels right for them,” Schuman added.

Nick Carter’s Wife Suffers a Miscarriage, Singer Reveals She Was Pregnant with Their Second Child

In November 2017, Schuman alleged that Carter, who was 22 at the time, had invited her over to his house and took her into the bathroom where they started kissing. It was then, she wrote, that Carter allegedly began to unbutton her pants and ignored her objections before allegedly performing oral sex on her. Schuman claimed he then demanded she perform oral sex on him.

Carter previously responded to the allegations with an exclusive statement to PEOPLE.

“I am shocked and saddened by Ms. Schuman’s accusations. Melissa never expressed to me while we were together or at any time since that anything we did was not consensual. We went on to record a song and perform together, and I was always respectful and supportive of Melissa both personally and professionally,” the boy band member said.

“This is the first that I am hearing about these accusations, nearly two decades later. It is contrary to my nature and everything I hold dear to intentionally cause someone discomfort or harm.” 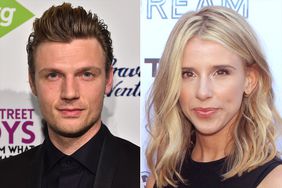