The pair, who have kept their romance largely under wraps, coordinated in white T-shirts and sunglasses.

As they walked to Target, Steinfeld, 21, hung her arm around Horan, 24, as they shared a smooch.

The pair continued to indulge in some PDA as they waited for the elevator.

Six months before their outing on Thursday, the couple was spotted together for the first time singing and dancing at a Backstreet Boys show in Las Vegas, but a source told PEOPLE at the time the actress was newly single and not ready to jump into a new relationship.

“She’s not actively pursuing anything. Niall is really into her but she’s unsure if she wants to get into something new right away,” said the source.

The former One Direction band member raved about the Bumblebee actress on Instagram for her birthday in December, calling her the “loveliest person on the planet and one of my best friends.”

Then in May, Horan and Steinfeld were spotted on a low-key date at Los Angeles hot spot E.P. & L.P.

“Niall had his arm around Hailee and they were holding hands,” an onlooker told PEOPLE exclusively. “They definitely looked like a couple.”

And in June, they enjoyed a rare romantic day out in New York City. 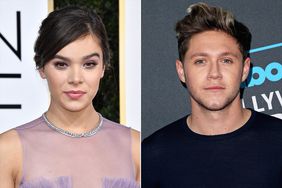