NEEDTOBREATHE's 'Forever on Your Side Tour' : See Behind-the-Scenes Photos!

"We've said this before, but this is the most fun tour we've ever had!" NEEDTOBREATHE's Bear Rinehart said

Forever on Your Side Tour

The band began their 37-city headlining Forever on Your Side Tour in August.

“We’ve said this before, but this is the most fun tour we’ve ever had!" said guitarist and singer Bear Rinehart.

Among the celebrities and athletes who are fans of NEEDTOBREATHE is Chicago Bulls' Justin Holiday.

During their visit to Seattle, Washington, the band visited the Seattle Seahawks' stadium.

The biggest production yet of the band's career, this tour has approximately 100,000 total attendees so far and will finish with around 150,000.

"We’re getting better and better at being out on the road for long periods of time as our career has progressed,” said Bear Rinehart.

Forever On Your Side

As they began their headlining tour last month, they kicked off their time on the road by surprising fans with a new music video. The clip was for the band’s title track of their 4-song collection Forever on Your Side (Niles City Sound Sessions).

“When we wrote the song ‘Forever on Your Side,’ we were thinking of our fans who have been with us since the very beginning,” said Bear Rinehart. 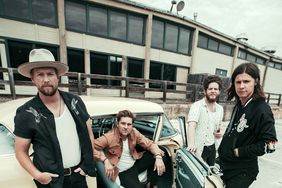 NEEDTOBREATHE Kick Off Tour with Surprise 'Forever on Your Side' Video Release: Watch Here