Kevin Jonas couldn’t help but celebrate his return to the 2019 MTV Video Music Awards with a little romance.

The “Sucker” singer, 31, and wife of 10 years Danielle Jonas may have been the first to wed out of the sibling pop stars, but the couple’s steamy red carpet shots looks like they’re more in love than ever.

Dressed in a black suit, Kevin was seen holding the 32-year-old, who was clad in a Berta tassel mini dress, while grabbing her rear and sharing a kiss.

Danielle’s hair was worn in loose curls, held back with a crossed barrette as she wrapped her arms around her husband and the two looked lovingly into each other’s eyes at Monday night’s event in Newark, New Jersey.

In a third shot, the father of two was seen kissing Danielle’s neck, with her silver wrap heels visible in the photo, as she giggled.

Later that evening, the boy band took home the VMA for best pop for their Republic Records hit “Sucker.”

Kevin was only 21 years old when he asked Danielle to marry him in 2009 after two years of dating.

After presenting Danielle with a cushion-cut diamond ring that he designed with Jacob & Co., Kevin told PEOPLE at the time that she said, “Yes, yes, yes like 500 times super fast in a row.”

The couple — who now share daughters Alena, 5, and Valentina, 2½ — met in May 2007 while vacationing with their families in the Bahamas, but they previously crossed paths at church events in New Jersey as kids. Nearly six months after getting engaged, Kevin and Danielle wed at a French-style château in Huntington, New York, on Dec. 19, 2009. 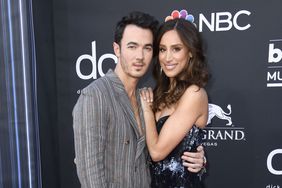