The Must-See Moments from the 2017 MTV EMAs: From Demi Lovato's Domination to Eminem's Return

MTV pulled out all the stops, with an ever-evolving stage bringing surprises throughout the night, and artists appearing at all corners of the arena

Shawn Mendes was the big winner at the MTV EMA Awards in London on Sunday night. Along with picking up the best song award for "There’s Nothing Holdin’ Me Back," the Canadian also went home with the awards for best artist and biggest fans.

The scenery was totally over-the-top during Sunday's show.

Mendes rocked the audience inside a constantly-changing lightbox while, earlier, British artist Stormzy took to the stage from the sunroof of a police squad car with emergency lights blazing.

Yet, the entrance of the night went to Kylie Jenner's baby daddy Travis Scott, who flew on the back of an animatronic eagle over the heads of the audience, while somehow managing to sing "Butterfly Effect" without losing his footing.

Demi Lovato may not have gone home with an EMA, but she definitely hit all the right notes during her soaring performance. The singer treated viewers to both her hits “Sorry Not Sorry” and “Tell Me You Love Me," leaving the crowd dancing in awe.

EMINEM RETURNS TO THE STAGE

Eminem opened the show with his new hit "Walk on Water." Striding out on a bridge raised high above the stage, the rapper – performing live for the first time in years – was met by a huge roar from the crowd.

Joined onstage by Skylar Grey (filling in for Beyoncé) and a 20-piece orchestra, Eminem led the audience in a swaying sea of hands, with a backdrop of crashing icebergs dazzling behind him. Later on, the rapper also went home with the best hip hop award.

Best pop winner Camila Cabello took the stage in front of a backdrop of flamenco-style scarlet. Thanks to the hydraulic stage the songstress later ended her routine with a Havana-inspired poolside set. Cabello was surrounded by dancers rolling on sun loungers and the surface of a surprise animated pool.

U2 CEMENTS THEIR STATUS AS LIVING LEGENDS

The Irish rockers picked up the MTV global icon award — but not before they rocked London’s iconic Trafalgar Square the previous night. Starting with "Sunday Bloody Sunday," the band played a string of their most famous hits, including "One and Pride (In the Name of Love)." They then debuted their new single “Get Out Of Your Own Way."

“So four Irish guys showed up in Trafalgar Square last night. We played under Admiral Nelson’s statue. That’s a big deal if you’re an Irish guy,” drummer Larry Mullen Jr. told the audience after the band accepted their award from Jared Leto —who said, "U2 changed my life." 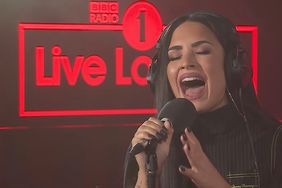 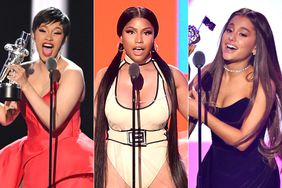