"People look to Dolly for guidance, and she knows that. She wears that responsibility with the same grace and pride she rocks a two-piece Nudie suit," Cyrus wrote about Parton

Miley Cyrus is singing her praises for her "fairy godmother."

Dolly Parton was listed on Time's 100 Most Influential People of 2021 on Wednesday, and Cyrus wrote her profile, calling Parton the "definition of humanitarian."

"Have you ever met anyone who doesn't love Dolly Parton? I never have," Cyrus, 28, wrote. "Dolly is not only my idol because of her incomparable career — she's also my role model because of her steadfast morals and values. At her core, she is the definition of a humanitarian."

"She's also the world's most impeccably purposeful walking contradiction, having developed her iconic look after being inspired by the town tramp. Now she's known as a saintly, even godlike, figure," she continued.

The "Wrecking Ball" singer also recalled the time Parton, 75, was on set for Hannah Montana conducting a table read — and she described Parton's "bedazzled glory."

"Her smell, the way her nails tapped the table, the sound it made when she flipped the pages of the script — I could see that she fascinated other people too. A living fantasy was in front of all of us," Cyrus wrote.

But despite Parton's iconic looks and musical talents, Cyrus noted that her most defining traits are her "honesty, truth and her faith."

"People look to Dolly for guidance, and she knows that. She wears that responsibility with the same grace and pride she rocks a two-piece Nudie suit," she wrote. "She recognizes how impactful her choices will be as one of the most iconic and powerful voices in country music, and she leaves no one behind."

She then went on to note Parton's civic accomplishments — such as the $1 million donation to COVID vaccine research and her Imagination Library that provides millions of books for kids. She also noted her constant celebration of the queer community.

Cyrus closed the profile by noting that despite the theory that people "shouldn't meet their heroes," she wished everyone had the chance to meet Parton.

"She's even better than your sparkliest dreams. She may be my fairy godmother, but I think she's that to everyone else too. I am happy to share her with the world," Cyrus wrote.

"I've never met anyone that doesn't like Dolly Parton," Cyrus said then. "And it's safe to say if they don't like her, it's only because they love her. As the most honored and revered female country singer-songwriter of all time, Dolly Parton has influenced music beyond her own genre. Achieving 25 gold, platinum and multi-platinum awards, Dolly has had 26 songs reach No. 1 on the Billboard country charts — a record for any female artist."

And in 2019, Parton told PEOPLE that Cyrus has "got good stuff in her."

"I've told her some things that I think are valuable and that she uses, but I'd rather live an example," Parton said. "[I'd rather] be an example rather than just try to tell somebody to do this, do that because I don't think that's right. Everybody's different."

"You've got your own journey," she added. "And some people are going to help you along the way and they can kick a few rocks out of the road for you, but you got to walk it." 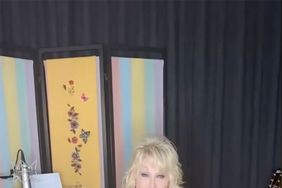