"The maestro Armando Manzanero left us today," tweeted Marc Anthony of his death. "A person with a ginormous talent, an admirable man who with his music and songwriting inspired so many of us"

Legendary Mexican singer-songwriter Armando Manzanero has died of COVID-19 complications. He was 85.

On Monday, the renowned musician died, weeks after testing positive for the coronavirus on Dec. 17 and five days after he was intubated, according to Mexico's El Universal. The newspaper reported that he was starting to be stable and was able to answer phone calls until last night.

Manzanero composed hundreds of songs, including some that were translated to English such as classic track "Somos Novios," which was recorded in English by Perry Como and Elvis Presley as "It's Impossible." (Como's rendition was nominated for a song of the year Grammy in 1971.) In 2014, Manzanero was recognized with a lifetime achievement award at the Grammy Awards.

"I was just informed of the death of Mr. Armando Manzanero. It's something that's very sad," he said in his daily news briefing. "Armando Manzanero was a great composer, the best of our country. He was a sensible man."

Mexico's Society of Authors and Composers — of which Manzanero served as president — also shared the news this morning, describing him as an "exceptional composer" and the "romantic soul of Mexico."

"He was one of the greatest artists of our time, creator of the 'most beautiful music of the world,'" the society wrote.

"I'll keep this memory forever," wrote Maluma on Instagram along with a video of the two meeting. "Today, one of my biggest inspirations died. Sending greetings to his family members. I'm with you from afar."

"The maestro Armando Manzanero left us today," tweeted Marc Anthony. "A person with a ginormous talent, an admirable man who with his music and songwriting inspired so many of us. In the midst of the sadness for his passing, I'm thankful for the blessing of his musical legacy. Thank you for so much, maestro."

"One of Mexico and of the world's greatest," wrote Paulina Rubio, along with a video of the two performing on Instagram. "Your passing hurts us. We're blessed to have your music. Sending a big hug to his family."

Other of his songs include "Contigo Aprendí," "Nunca en el mundo" and "Te Extraño." The first was one of four songs recorded by Luis Miguel on his Romances album in 1997.

"Really, I hardly ever wrote for myself because I never thought I'd be an interpreter," he told Billboard in 2003. "Even now, I can't believe it. I wrote songs for everyone. And I don't write them with a specific interpreter in mind. Anyone can sing them." 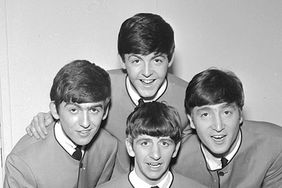