Talk about a sweet surprise!

On Saturday, Spice Girls star Melanie "Mel C" Chisholm, aka Sporty Spice, delighted concertgoers at the 8th Annual We Can Survive concert at the Hollywood Bowl, when she joined Chris Martin onstage for a rendition of the girl group's song "2 Become 1."

Prior to the moment, Martin, 44, teased fans, revealing one of Coldplay's dreams was to perform with a member of the Spice Girls. After he instructed fans to put that particular wish into the universe, Chisholm, 47, walked out seconds later to cheers from the audience. The pair then wowed the crowd with their duet of the '90s hit.

On Sunday, Chisholm told her Instagram followers that the performance was a last-minute proposal from Martin.

"🤩What a fantastic, unexpected night!" she wrote. "😜 I gave Chris a text to tell him we would be coming to his @imlistening @audacy #wecansurvivegig, at the @HollywoodBowl and the next thing I know, he's on FaceTime while I'm in the nail salon, asking me to come up on stage with him!"

She continued, "😍 Well, what could I say to an offer like that! Thank you @coldplay for such an amazing night and experience. Hopefully I can get back to @hollywoodbowl soon with three (maybe four!) certain ladies for company!"

Last week, Chisholm was eliminated from season 30 of Dancing With the Stars, however, the singer opened up to PEOPLE (the TV Show) about going back on tour with the Spice Girls — this time, with Victoria Beckham, aka Posh Spice, onboard.

"At the moment, it's only the four of us," she explained. "We're working on Victoria. She might be sucked into the idea at some point."

The Spice Girls, comprised of Chisholm, Beckham Melanie "Mel B" Brown, Emma Bunton and Geri Halliwell, last hit the stage together on their 2019 reunion tour — but the fashion designer, 47, did not join.

RELATED VIDEO: Mel C. Jokes Spice Girls Are 'Working on' Victoria Beckham to Get Back on Stage With Them

"This has to happen," Chisholm also told Entertainment Tonight. "We talk about it constantly. We did the shows in 2019, the plan was to continue on. Of course, the world has been in such turmoil, but the plan beyond this is to get out there when it's safe, when we can do it. What's tough is there are so many artists that want to get out there, and there are only so many venues, so we're all kind of queuing up going, 'I want to! I want to!'"

Chisholm's revelation comes ahead of the Oct. 29 release of the Spice 25, a deluxe edition of the girl group's debut album in honor of their 25th anniversary.

"There's some demos, some remixes and there were lots of silly things that went on in the studio back in the day," she told PEOPLE. "It was wild. So many things happened in such a short space of time that a lot of us have forgotten things."

Mel B Addresses Sound Issues During Spice Girls Tour Opener: 'Vocals Will Get Much Better' 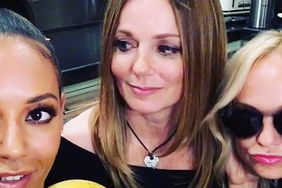 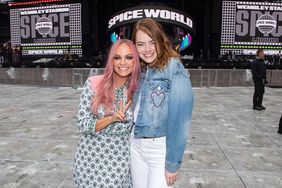