After a debilitating battle with panic disorder, pop star Meghan Trainor says, "I'm in the best place of my life"

Today, the singer-songwriter couldn't be happier. She and husband Daryl Sabara, 29, are raising their 7-month-old son Riley, and Trainor is busier than ever, co-hosting Peacock's Top Chef Family Style (streaming now) and judging Clash of the Cover Bands (premiering Oct. 13 on E!). But she had to overcome a debilitating battle with panic disorder to get here.

Five years ago, the pop star had a released string of hit songs (from "All About That Bass" to "No"), won the Grammy Award for best new artist and was seemingly on top of the world. But inside, she was struggling.

Listen to more of PEOPLE's cover story interview with Meghan Trainor below on our daily podcast PEOPLE Every Day.

In December 2016, Trainor had her first panic attack, live on-air, when she was on CBS This Morning with Gayle King to announce the 2017 Grammy nominees. That morning, Trainor's assistant had gone over her breakneck schedule, which got the singer's mind racing.

Watch the full episode of People Cover Story: Meghan Trainor on PeopleTV.com or on the PeopleTV app.

"I was announcing the nominees, and I was vibrating. I felt like I was going to pass out on live television. I was like, 'What's happening? I must be dying,'" Trainor, 27, recalls. "As soon as they said 'Cut,' I went offstage and was [gasping for air] in front of everyone."

Trainor had been scheduled to do another interview that morning, but they canceled the appearance.

"Gayle was my email buddy after that and always checked in on me," says Trainor of King. "I was so embarrassed and apologized, but she made everything so much better for me. She's an angel on this earth."

A few months after that episode, Trainor had undergone her second surgery for vocal cord hemorrhaging, and while she was on vocal rest, she worried she'd never sing again.

"I was in a dark place," says Trainor, who had begun dating Spy Kids star Sabara in 2016. "I had everything I wanted — I had the love of my life — but mentally and physically I felt ill."

After multiple trips to the emergency room for physical symptoms, Trainor revealed she was struggling with anxiety and depression and was diagnosed with panic disorder.

"Some nights I remember I ate a bunch of food, then I got scared, and I was like, 'I need to go to the emergency room because I'm allergic to what I just ate.' The doctor came in, looked really sad, and was like, 'Have you ever heard of a panic attack?' I was like, 'No, no, no, I'm having an allergic reaction. If you just look in the back of my throat, it's closing.' That was my first lesson on what a panic attack can do to you," Trainor recalls.

Panic disorder — which falls under the larger umbrella of anxiety disorders — triggers a "fight-or-flight response," Dr. Gilliland adds. "It's as if our mind takes the worst-case scenario possible and our body acts as if it's absolutely going to happen ... The level of discomfort is so intense that people often go to the emergency room because they believe they're having a heart attack."

Trainor found relief when she consulted a psychiatrist. She began treating her panic disorder with medication and therapy.

"With the panic [attacks], you literally feel like you're vibrating nonstop. But everything just got quiet, and I was back to my normal self," she says of her treatment.

Following her doctors' recommendations, Trainor stayed on antidepressants during her pregnancy and hasn't experienced postpartum depression.

"I'm not ashamed to say I'm on antidepressants," she says. "That medicine saved me, saved my life, saved my career. I'm back better than ever."

Indeed, Trainor is feeling happier and more fulfilled than ever. In addition to Top Chef Family Style and Clash of the Cover Bands, Trainor and her brother Ryan just launched a new podcast, Workin' on It. She'll also release a deluxe version of her holiday album, A Very Trainor Christmas, on Oct. 29, and she's working on new music.

Says Trainor: "I'm in the best place of my life."

For more on Meghan Trainor, pick up the new issue of PEOPLE, on newsstands everywhere Friday. 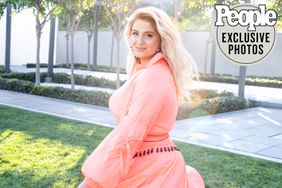 Meghan Trainor Reveals Battle with Panic Disorder: 'I Went to the Emergency Room a Couple of Times'