It's been a long wait, but new music from Mariah Carey is finally here

It’s been a long wait, but new music from Mariah Carey is finally here!

“You take my love for granted / you left me lost and disenchanted / bulldozed my heart as if you planned it,” Carey sings on the song, before repeating “How ’bout you get the f— out?” in its chorus.

Rather than displaying her usual powerhouse pipes, Carey keeps it cool and breathy on the track, which is produced by Nineteen85. Her tone perfectly matches the groove of the chill R&B beat. Together, they make for a sultry track — one that perfectly embodies Carey’s “I don’t know her” attitude.

“I wanted to give my fans and everyone a first listen that wasn’t so serious,” Carey said in a statement. “I’ve had so much fun making this album, and I wanted the first moment to reflect that light-hearted spirit.”

“GTFO” is the first taste of new music fans have had from Carey in years. Her upcoming album, which will be Carey’s 15th studio LP, is the first she’s released since 2014. It’s slated for release later this year.

Another single off the record, called “With You,” is scheduled for an Oct. 5 release.

Meanwhile, the music video for “GTFO” will drop on Friday. The video is directed by Sarah McColgan, who has previously worked with Charli XCX and Kelly Clarkson.

Carey gave fans a sneak peek of it on Wednesday, tweeting out a clip. In it, she lounges in the dark around an empty house in a handful of revealing outfits, wine glass in hand.

Late last month, Carey opened up to PEOPLE about her upcoming album.

“I’ve been working on my new album for a while. This is a labor of love and I’m really excited,” the mother of two said. “This is me at this moment in my life being able to express myself as a writer and a singer. I’m just really in a good place.”

While her album will feel “current,” the singer insists she’s not trying to follow “anybody else’s trends.”

“My fans just want to hear me express myself and speak from the heart and sing from the heart,” Carey said. “Some of the record is lighthearted and fun, and some [songs] I really went deep in terms of the lyrical content. There’s a nice cross-section of things.”

All of this comes on the heels of heralded Carey’s Las Vegas Residency show “The Butterfly Returns,” which has been extended at Caesars Palace into 2019 with new dates in February.

“I’ve been loving it so much,” she told PEOPLE about her show. “A lot of the fans who have come out to see it were really happy having a little more diversity. I want to make it really impromptu and surprise the people who have come out again and again to see the show.”

Carey will also be performing at the eighth annual iHeartRadio Music Festival at Las Vegas’ T-Mobile Arena on Sept. 21. 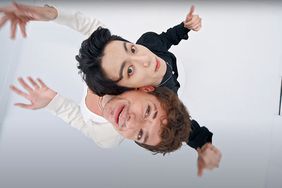