Mariah Carey 'Blames Everybody' for Infamous N.Y.E. Performance and Says She's 'Incapable of Being in the Real World'

Despite kicking off 2017 with controversy, Mariah Carey is making a fresh start.

In a new interview with Rolling Stone, the 46-year-old singer revisits her disastrous Dick Clark’s New Year’s Rockin’ Eve gig and stands firm with the statement her camp released asserting that the show sabotaged the performance and “set [her] up to fail,” which the production company in turn refuted.

“I used to get upset by things,” she says of the performance. “This was out of my control, and had everything not been such a total chaotic mess, then I would have been able to make something happen. Even the dancers should have stopped dancing and helped me off the f—ing stage. I’m sorry. It was a mess, and I blame everybody, and I blame myself for not leaving after rehearsal.”

During Carey’s performance, she fumbled through three songs, visibly struggling with her earpiece as the broadcast continued.

“It’s just something where if I can’t explain it to the entire world, then they’re not going to understand it, because it’s not what they do,” explains Carey. “Just like I wouldn’t understand somebody who had a desk job and how to do that. I couldn’t. I literally am incapable of being in the real world and surviving.”

Just over a month after the performance, Carey made her live comeback during an appearance on Jimmy Kimmel Live! in which she performed her latest ballad, “I Don’t,” a song inspired by her high-profile split from Australian billionaire James Packer in October.

Since the split, Carey has confirmed her relationship with new beau Bryan Tanaka, 33, and comments on how she’s keeping the relationship more private than she has done in the past.

“I don’t think we’re being public in a way that my relationships have been public before,” she says. “I really don’t. To me, the best thing of this is to keep it a little more private. But I’m not going to not go places with him and enjoy our lives because everybody thinks, ‘Oh, it’s too soon!’ kind of thing. We all saw the freakin’ show. This is not a surprise.”

Tanaka and Carey had kept the world guessing about their relationship status ever since she split from Packer. After Carey broke off the engagement, and documented some of it in her reality series Mariah’s World, she connected with Tanaka while he was working as a backup dancer on her world tour.

Carey will head out on tour with Lionel Richie beginning in March. 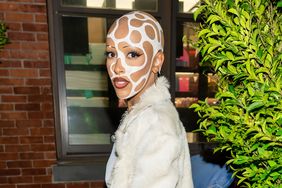