Maluma Surprises Fans with Visual Album Inspired by an 'Escape' Trip to Jamaica: 'My Sixth Child!'

"I was questioning if I should even continue doing music," Maluma said in a statement. "I did a lot of soul-searching there and came back a different person"

No, he's not having a baby ... he's welcoming an album! On Thursday, Maluma surprised fans with the release of 7 Días en Jamaica — a conceptual and visual project that follows the singer during, well, seven days in Jamaica.

Laced with dancehall and afrobeat and featuring his signature reggaetón style, the tracks — which kick off with "Tónika" featuring Ziggy Marley, son of Bob Marley — the Colombian singer, who turned 27 on Thursday, takes listeners into a journey through the Caribbean country.

Taking to Instagram Live minutes before the album-film's release, the singer addressed a viral Instagram post where he posed with someone's belly making fans believe he was expecting a baby. Turns out, it's actually his new album!

Maluma Reflects on His Rapid Rise to Global Superstardom: 'I Feel Like I'm Just Starting'

"Yes, I'm going to be a dad! And the baby is born in 30 minutes," he said with a laugh. "It's my sixth child... For the people who thought I was going to be a dad. This is my new baby, 7 Días En Jamaica," he said in Spanish on Instagram Live ahead of the album's release. "This is a project that I've been working on for a long time."

"When I was in Jamaica, I had the opportunity to be there with producers and composers for an album that was set to release before Papi Juancho," he added. "We had it ready, but because of COVID we couldn't make the videos so we released Papi Juancho first, but we had all the music ready."

The stunning film follows Maluma as he explores different aspects of Jamaican culture and gets together with a gorgeous love interest he met on the island ... or was she just from his imagination? He also plays soccer with some children on a dirt field during "Desayun-Arte."

Maluma Becomes First Man to Be on the Cover of Elle: 'Let's Keep Dreaming and Achieving'

"Those seven days in Jamaica came at a time when I needed to escape and decompress as I had intensely worked non-stop on my career for seven years and I was questioning if I should even continue doing music," Maluma said in a statement. "I did a lot of soul-searching there and came back a different person, completely inspired and having realized that music is not just what I do, its part of who I am; how I experience and interpret life."

To support the album, the singer is also hosting an art show in Florida that includes a large piece of art made in his likeness out of plastic trash, which is set to be auctioned to benefit environmental non-profits based in his native Colombia.

Some tracks on the album include "Chocolate," "Agua de Jamaica," "Desayun-Arte" and "La Burbuja." 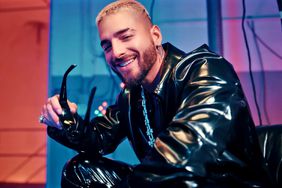 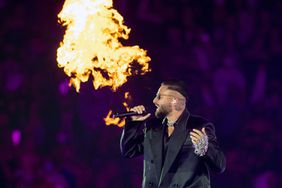