"I love my son very much," Madonna said in her statement to PEOPLE

Madonna has spoken out in support of her son Rocco Ritchie following his arrest for possession of marijuana.

The singer called her 16-year-old child’s Sept. 28 arrest “a family matter” in a statement to PEOPLE. “I love my son very much. I will do whatever I can to give him the support that he needs, and I ask that you respect our privacy at this time,” Madonna, 58, said in her statement.

PEOPLE confirms Rocco, who lives with his father Guy Ritchie, was arrested for holding a small amount of cannabis on Sept. 28 in north west London.

“The arrest follows a stop and search by officers from Camden borough on Wednesday, 28 September,” Scotland Yard tells PEOPLE in an official statement. “[Rocco] was dealt with by way of Triage, which uses multiple strands to engage and educate young people in order to prevent re-offending.”

In early September, Madonna visited Rocco in London after her and Ritchie’s eight-month-long custody battle had ended.

The dispute between Madonna and Ritchie, 48, began in December 2015 after he refused to return their son to his mother in New York City for the holidays, despite an order from a New York Supreme Court judge

Following a contentious hearing in March and months of back-and-forth outside of court between the former couple’s lawyers and Rocco’s court-appointed attorney, the exes came to an agreement privately. Both Madonna and Ritchie agreed that Rocco will remain in his father’s care in the U.K. 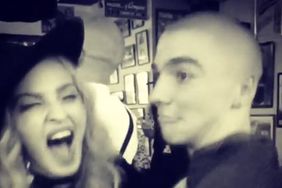