"Mac deserves to be sent off with an evening of celebrating his life, discussing his struggles, and remembering his stories," organizers said

The people of Pittsburgh, Pennsylvania, honored one of their own with a heartfelt tribute on Tuesday.

“Mac deserves to be sent off with an evening of celebrating his life, discussing his struggles, and remembering his stories; most importantly for his iconic work that brought joy into the lives of everybody who listened,” said Nightfall Records, a local record label that organized the five-hour vigil for Miller, who reportedly had a net worth of $9 million.

“This entire day is about Malcolm and showing the love our city has for him,” the label added.

The rapper, born Malcolm James McCormick, was found dead in his Studio City, California, home on Friday. A source told PEOPLE that Miller went into cardiac arrest after an apparent drug overdose. The official cause of death is yet to be determined.

For the memorial, many decorated the park’s famous blue side with candles, flowers and the black and gold colors of the Pittsburgh Steelers, Miller’s favorite NFL team. Several local artists drew portraits and murals of the local musician throughout the park.

The evening at the park, which is two blocks from Taylor Allderdice High School where Miller attended, also shed light on addiction and mental health as nonprofit organizations were invited to attend and speak, according to event organizers.

Blue Slide Park debuted at No. 1 on the Billboard 200 chart and sold 145,000 copies in its first week, making it the first independently-distributed debut album to top the chart.

“I was literally walking to Blue Slide Park and the album was almost done and I was walking to get some last-minute inspiration,” Miller told MTV in 2012.

And on Tuesday morning, in honor of Miller, Pittsburgh Public Works painted a fresh coat of blue paint on the famous slide.

Tributes from celebrities poured in after Miller’s death. Miller’s ex-girlfriend Ariana Grande broke her silence on Saturday with a black-and-white photograph of Miller gazing up at the camera.

Miller’s mother Karen Meyers also mourned her son’s death on Instagram with a photo of the pair smiling at a Pittsburgh Pirates game.

On Monday, Los Angeles County coroner’s spokeswoman Sarah Ardalani confirmed to PEOPLE that Miller’s autopsy was completed and his body was released to his family. 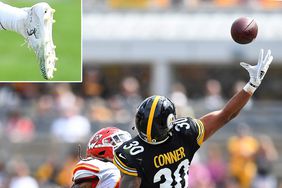